‘One of the nuttier things I’ve seen’: MAGA civil war erupts in Georgia 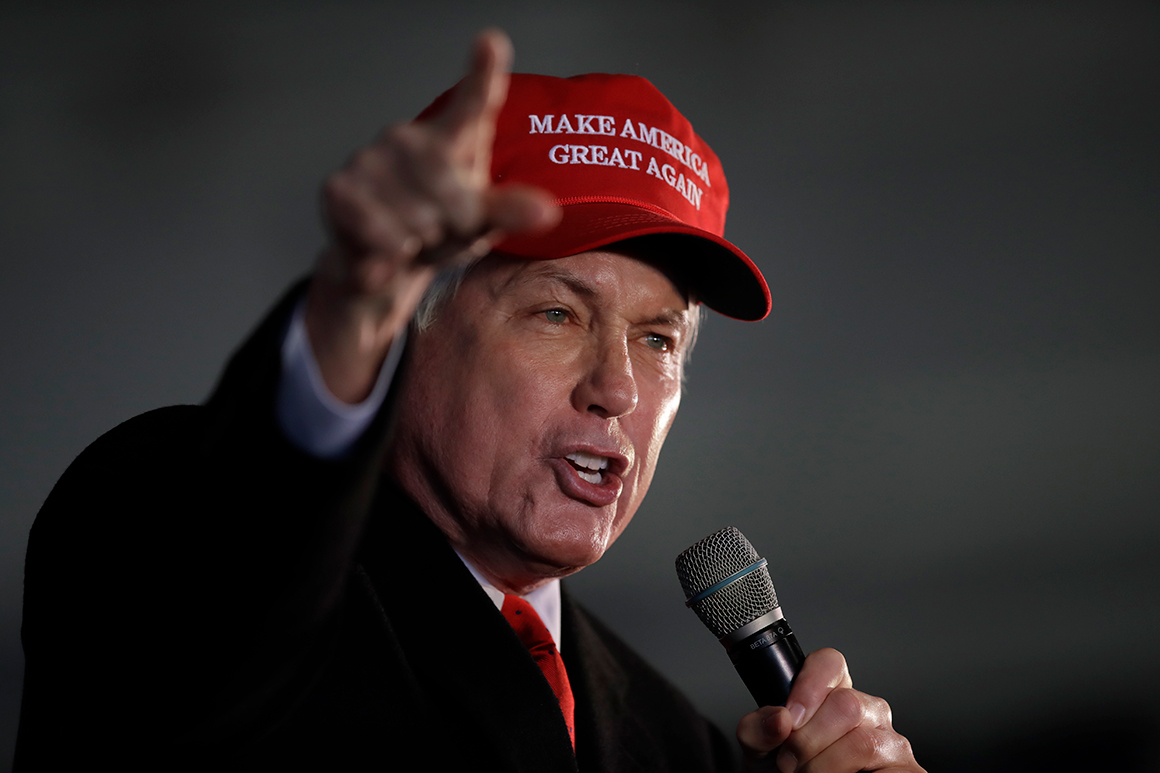 Amid party fears that a MAGA boycott could cost them control of the U.S. Senate, Trump privately spoke by phone this week with Wood to tell him to “knock it off,” a source briefed on the discussion told POLITICO.

Axios was first to report on the call to Wood and lawyer Sidney Powell, whom Trump had dismissed from his legal team after she espoused expansive conspiracy theories.

Former U.S. House Speaker Newt Gingrich, who helped build the modern Republican Party in Georgia, theorized the lawyers were whipping up conservatives because “they understand that if they’re out there saying more and more radical things, they’ll get more publicity.”

“It’s one of the nuttier things I’ve seen in a long time in politics,” Gingrich told POLITICO, adding that it’s OK for Trump to question whether the vote against him was rigged — as long as he tells Republicans to vote for Perdue and Loeffler, and to not listen to Wood.

“Lin Wood and Sidney Powell are totally destructive,” Gingrich wrote on Twitter Thursday. “Every Georgia conservative who cares about America MUST vote in the runoff.”

Gingrich’s remarks came after Wood — who has a roster of famous cases and a huge MAGA Twitter following — stuck to his script at an energetic “Stop the Steal” rally Wednesday night.

“Why would you go back and vote in another rigged election?” Wood asked, prompting cheers. Wood mentioned he had spoken to the president, but didn’t say he was told to quit bashing Perdue and Loeffler ahead of the runoff.

Wood’s efforts have generated attacks from conservatives including Georgia-based commentator Erick Erickson, who took Wood to task for his voting record, prompting a rebuttal from Wood on Twitter Thursday. In his newsletter, Erickson joked Wood was part of a Democratic “Deep State.”

Trump-supporting website Breitbart, which excoriated the Atlanta-based attorney for his past contributions to Democrats, suggested he was doing their dirty work and hurting the GOP.

“Grift Wood: ‘MAGA’ Poseur Goes for Sabotage in Georgia,” screamed a headline on Breitbart’s home page that linked to a story on his past contributions to Barack Obama in 2008 and Perdue’s opponent in 2014.

The Trump campaign’s Twitter account retweeted the post, leading Wood to call Breitbart “dishonest” as he highlighted all the money he has donated to Trump and other Republicans. That led Trump-supporting Gateway Pundit website to bemoan the criticism in a post with the headline: “WTH? Breitbart Wages War Against Attorney Lin Wood — Who Is Defending President Trump Against Evil Marxist Horde.”

The party divisions and fractures within conservative media highlighted the tensions and fear gripping the Georgia Republican Party — much of it stoked by Trump’s loss in the state and his repeated and unsubstantiated claims the election was stolen.

Trump has launched a barrage of attacks on Republican Gov. Brian Kemp and Republican Secretary of State Brad Raffensperger, who has said there was no widespread fraud in the election. That claim was amplified this week by Trump’s U.S. Attorney General Bill Barr, leading to even more divisions in Trump’s orbit.

Trump is scheduled to travel to Georgia Saturday for a rally on behalf of Loeffler and Perdue. But it’s taking place amid Republican anxiety he’ll stray too far off script and engage in so many conspiracy theories about voting that it could depress turnout.

Obama, meanwhile, is planning to hold a virtual rally Friday for the Democratic candidates, Jon Ossoff and Raphael Warnock. Both campaigns and the Democratic Party have refrained from commenting publicly. Privately, Democratic officials are gloating that Trump has created a “Frankenstein monster“ he can’t control in Wood and other activists.

Wood’s pro-Trump bonafides among MAGA diehards on social media are what make his boycott call so dangerous to GOP efforts. Wood, who did not return messages seeking comment for this article, has become a darling among Trump loyalists for his prolific defense of the president on Twitter. He frequently pushes wild claims to his 717,000 followers, at one point boosting the notion that it wasn’t a coincidence when the president was infected with coronavirus.

Wood’s Twitter bio lists an acronym for the “Where We Go One We Go All” catch phrase of the QAnon conspiracy theory that posits Trump is fighting a war with a global cabal of Satanic pedophiles who drink the blood of children they slay. He also advised Congress’s first public QAnon adherent, Georgia Rep. Marjorie Taylor Greene.

An accomplished libel attorney with a knack for finding high-profile cases and clients, Wood gained a measure of fame for successfully representing Richard Jewell, the security guard who was falsely accused of being the 1996 Centennial Olympic Park bomber in Atlanta. He also represented the brother of JonBenet Ramsey, the child beauty pageant contestant whose 1996 murder is still unsolved.

In the Trump era, Wood’s clients have occupied central culture war roles, such as Kyle Rittenhouse, the 17-year-old arrested in the shooting of three demonstrators earlier this year at a Black Lives Matter protest in Kenosha, Wisconsin. Wood also represented another teen, Nicholas Sandmann, who sued media organizations for their depiction of him in a dispute with activists during a 2019 March for Life rally in Washington. CNN and the Washington Post reached settlements with Sandmann.

Two of Wood’s clients, Mark and Patricia McCloskey, spoke at the Republican National Convention in August after they gained notoriety for pointing guns at Black Lives Matter protestors outside their St. Louis home.

Not all of Wood’s clients have prevailed. In 2019, for instance, the attorney failed to persuade a jury to find Tesla CEO Elon Musk guilty of defaming Wood’s client in a tweet.

According to a lawsuit filed in August by three lawyers who worked with him, Wood in late 2019 began acting erratically, making “abusive, incoherent phone calls, voicemails, texts, and emails … All of these erratic communications have a few things in common: most of these emails profess that God or the Almighty was commanding his actions; many were stating his refusal to pay the Plaintiffs ‘one thin dime;’ and virtually all were abusive.”

The lawsuit alleges Wood’s behavior “continued to deteriorate, including assault and battery” on two of them, though “there was essentially no reason whatsoever for the attack, and Defendant Wood later acknowledged and apologized for this violence.”

Wood, however, denied the claims, stating on Twitter that it was a “shakedown effort.”

“These young lawyers have chosen to willingly engage in a disgraceful and unprofessional effort to publicly attack me by including irrelevant, out-of-context private messages I sent to them in the midst of a difficult time in my personal life arising primarily from my family’s reaction to my faith in Jesus Christ,” Wood wrote.

The three lawyers could not be reached for comment.

Before and after the election, Wood’s Twitter feed became a clearinghouse of conspiracy theories, such as a claim that the CIA built a “covert technology” to “surreptitiously steal elections.” That was ultimately disproved in Georgia when a hand recount of ballots showed that the machines tabulated the votes properly.

Wood filed a lawsuit to block the certification of Georgia’s election results, but that effort failed and an appeals court is not expected to take the case up. While the case was active, according to the Associated Press, Trump falsely claimed that signatures weren’t checked on Georgia absentee ballots.

Former GOP state Rep. Allen Peake said Trump needs to be even clearer with Wood — and call him out by name.

“He needs to shut those guys up. It’s pure insanity,” Peake said. “It’s almost dishonorable to any Republican to say that. It’s absolutely the dumbest thing I’ve ever heard. It’s a very small fringe of Republicans. But it needs to stop.”