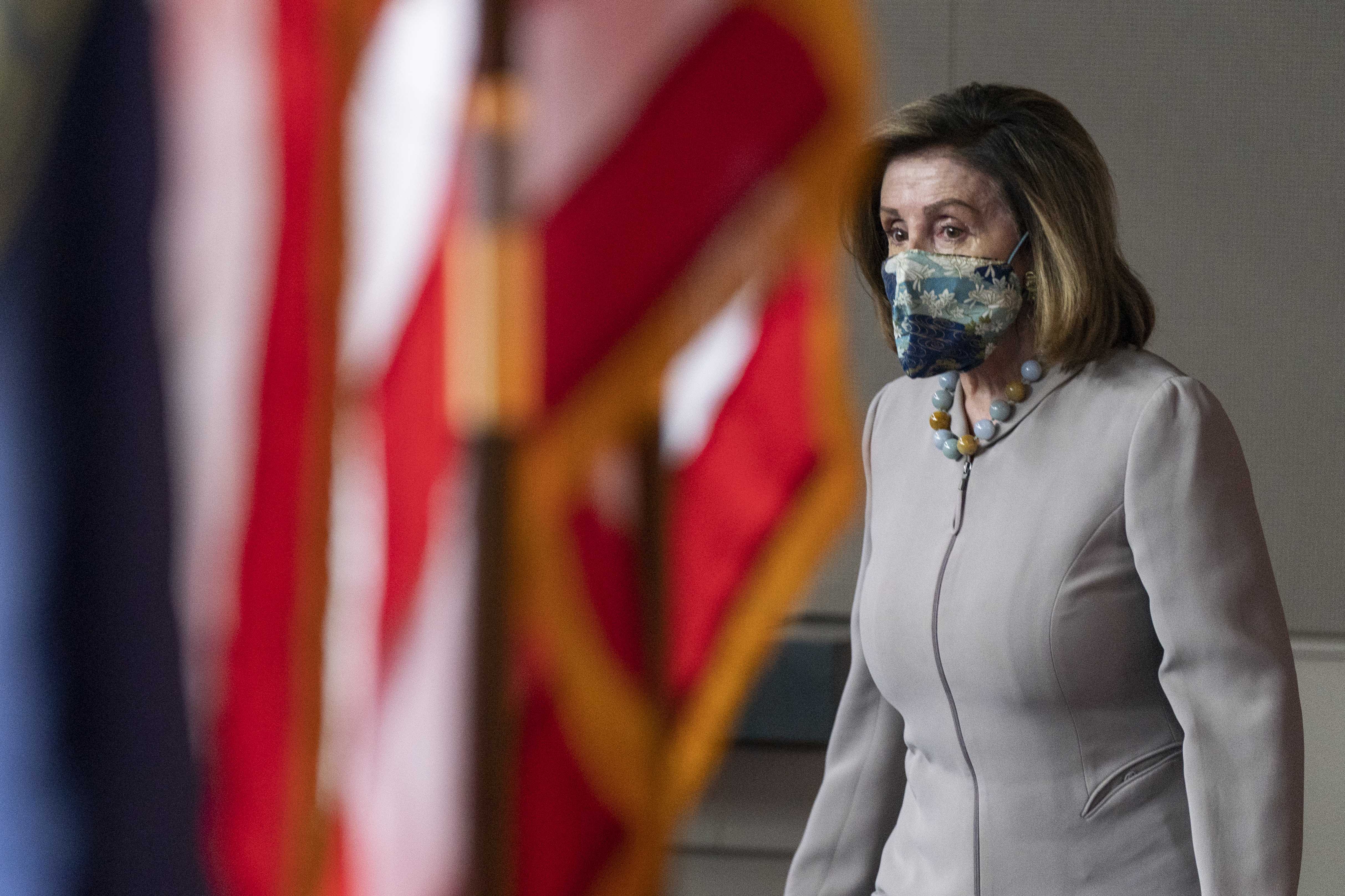 “I do think that it is unfortunate that Mr. McCarthy is trying to make an issue of this,” she said.

“But you know what he’s trying to do, he’s trying to deflect attention from the fact that he has QAnon in his delegation over there,” Pelosi added, referring to an outlandish conspiracy theory that has taken root among some conservatives and put Republicans on the defensive.

Pelosi said she and other congressional leaders were informed in 2015 about the matter at the same time that Swalwell was by the FBI. Law enforcement authorities were monitoring the woman at the center of the controversy and believed her to be an operative of China’s Ministry of State Security.

Known alternatively as Fang Fang or Christina Fang, the woman came to know Swalwell while he was still a city council member and had stayed in his orbit while he was in Congress, allegedly assisting with fundraising for Swalwell’s 2014 reelection campaign as well as helping to place an intern in his office, according to a report from Axios.

Swalwell immediately cut off contact with Fang — who is no longer in the country — when the FBI alerted him, and he has not been accused of any improper actions in his dealings with her.

“We knew at the same moment,” she said. “We knew when they knew and at that time, that was the end of it.”

McCarthy told Fox News Thursday morning that he was unaware of the matter until it came to light publicly earlier this week.

“I’m going to ask the FBI director to brief me,” McCarthy said. “As a leader and a member of the Gang of Eight, I did not know of this.”

Republicans have jumped at the chance to turn the screws on Swalwell following the report linking him to a suspected Chinese spy, and the news has captivated conservative media for days.

“Oh my gosh, talk about karma,” Rep. Chris Stewart (R-Utah), who sits with the California Democrat on the House Intelligence committee, said Tuesday on Fox News Thursday. “If this doesn’t show that God doesn’t have a sense of humor, what else does?”

The idea that any member of Congress had contact with an alleged spy for one of the country’s biggest global rivals would be fodder under any circumstances, but Swalwell had a particularly large target on his back.

Swalwell gained prominence in recent years as a frequent antagonist of Trump’s during the investigation into Russian interference in the 2016 election, and due to his abortive bid for the Democratic presidential nomination that ended in July 2019.

Republicans accused Swalwell of holding the president to a double standard.

“It was all Russia, Russia, Russia,” Rep. Brad Wenstrup (R-Ohio) said Thursday on Fox News. “He showed no concern about China, which if he went through an event of some type then he should be greatly concerned about China, and we didn’t hear from him on that.”

McCarthy and a collection of top Republicans have called into question Swalwell’s continued membership on the committee and tried to drag Pelosi and committee chair Adam Schiff into the mire.

“He is jeopardizing national security,” McCarthy said Thursday. “When did Nancy Pelosi know of this and why did she maintain him on the committee?”

Swalwell has sprung to his own defense, calling conservative attacks on him a cynical attempt to tar him for his criticisms of Trump.

Other congressional Republicans have also been quick to pile on to the California Democrat.

“Nancy Pelosi cannot allow him to stay on the intelligence committee, and he’s got to come clean with this,” Sen. Rick Scott (R-Fla.) said on Fox Business.

Trump himself thus far has not directly entered into the fray, but Thursday morning retweeted an earlier post from Texas Rep. Lance Gooden claiming Swalwell “actually colluded” with an an agent of the Chinese government.