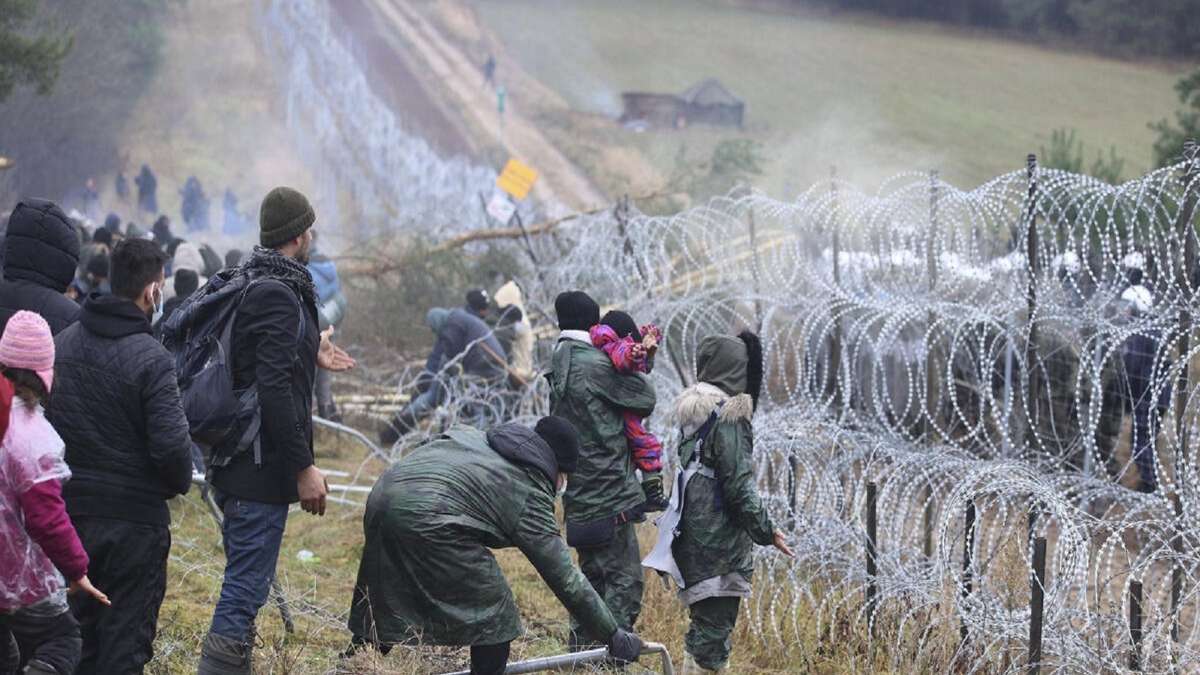 The situation on the EU’s eastern external border between Poland and Belarus is becoming increasingly devastating. Thousands of migrants want to cross – with a very specific goal.

Warsaw / Minsk – With cable cutters and shovels, they storm barbed wire fences and try to overcome the soldiers who have gathered at the border. Since Monday (8. November) migrants advance towards the EU * external border between Poland and Belarus – which leads to clashes with Polish security forces. Due to the critical situation, these were reinforced with additional troops. At the border, refugees apparently make no secret of what goal they have in mind – as a video by Belarusian journalist Tadeusz Giczan seems to prove.

The footage from the border area shows how Polish security forces seem to be preventing a group of migrants from crossing the border after part of the barbed wire fence was torn down. “Germany, Germany”, they call out loud. A helicopter hovers low over the heads of the refugees.

A section of the barbed wire fence has been removed. Polish servicemen formed a human shield to cover the hole and are trying to scare migrants off with a helicopter. The crowd is chanting “Germany!” pic.twitter.com/P99Yd9SRdO

Warsaw, meanwhile, accuses Minsk of controlling the migrants and driving them to the border. The Belarusian ruler Lukashenko wanted to destabilize the neighboring European countries Poland, Latvia and Lithuania through an “artificial migration route”, it said in a government statement.

In fact, on videos on social networks, Belarusian soldiers appear to be behind the migrants and appear to be driving them towards the border. These recordings are distributed among others by the Telegram channel Nexta, the main source of information for the Belarusian opposition. Polish Defense Minister Mariusz Blaszczak said on Twitter that he wanted to defend the border. The spokesman for the Polish intelligence coordinator, Stanisław Żaryn, described the events as “hybrid attacks”. The refugees are said to be mostly Iraqi Kurds, as reported by Deutsche Welle.

All activities of the migrants are carried out under the supervision and control of #Belarusian soldiers pic.twitter.com/hxkzv6Bg51

Federal Interior Minister Horst Seehofer asked the EU for support. “Poland or Germany cannot cope with this alone,” said Seehofer image. The Belarusian ruler Alexander Lukashenko is trying to use the fate of the people “to destabilize the West,” said Seehofer, adding that EU states now have to show solidarity.

A similar statement came from the Polish Prime Minister Mateusz Morawiecki. He sees the EU at risk from the influx of thousands of migrants on the Polish border with Belarus. “Today, the stability and security of the entire EU is at stake,” Morawiecki said on Twitter.

Lithuania is also taking measures and, in view of the worsening situation on the EU’s external border with Belarus, wants to impose a state of emergency in the border region for one month. The government of the Baltic EU country presented the relevant resolution to the parliament in Vilnius on Tuesday for approval. The cabinet is following a proposal by Interior Minister Agne Bilotaite. She previously said her country could expect “similar invasions and attacks”.

The state of emergency should therefore apply from midnight along the border with Belarus and five kilometers inland and in the migrant shelters in Kybartai, Medininkai, Pabrade, Rukla and Vilnius. Riots broke out there on Monday – tear gas was used in a camp. (bb with material from dpa) * Merkur.de is an offer from IPPEN.MEDIA