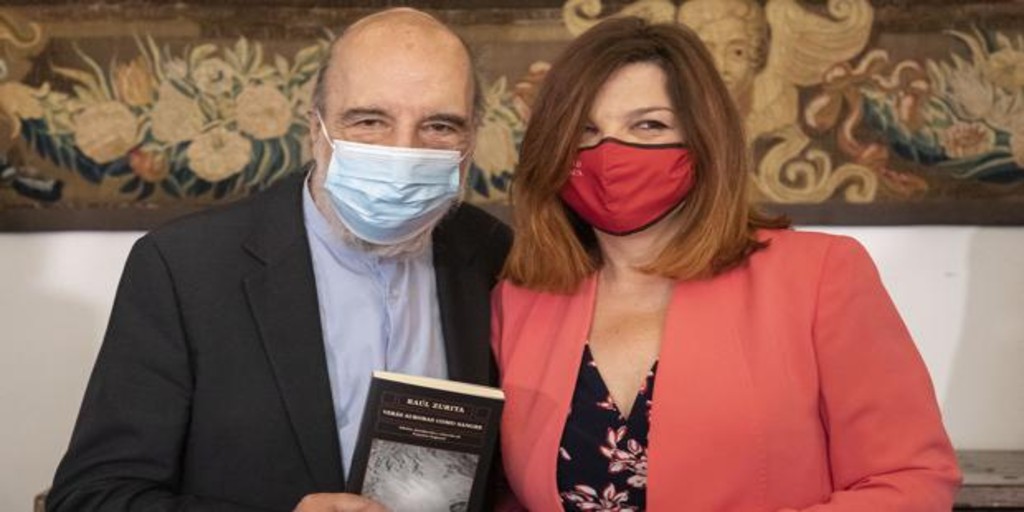 Raúl Zurita, XXIX Reina Sofía Prize for Ibero-American Poetry, was excited this Tuesday during the presentation of his new poetic anthology, entitled ‘You will see auroras of blood’, for the “beauty and care” of the bill by Ediciones Usal of the University of Salamanca. During a brief but heartfelt speech, the Chilean poet thanked in the Rectoral Hall of the Unamuno House-Museum for the result of the work, edited, introduced and selected by the professor of Ibero-American Literature of the Faculty of Philology of the Usal Francisca Noguerol.

“It is absolutely exciting. I fall short in the gratitude and love that I feel for you. I never thought in my life that I would have a book like this. It was not in my calculations, “said Zurita with humility. «One enters this profession of poetry, where you almost have to spit blood, without horizons. And seeing this incredible work, summed up in beauty and care, I get emotional. I’m very excited, sorry for the clumsiness of my words, “he said. The poet ended his speech with five senses “thank you” that were only interrupted by the standing ovation of the room.

During question time, the Chilean poet reflected on the meaning of his work and its form of expression. «Poetry is in so many things, from love to death. It is imagining a new world. Poetry is flooded with the human from its beginnings. And its final horizon is the inexhaustible desire for love that crosses the whole of humanity », he valued, before acknowledging that he dreams of an Ibero-America “without inequalities.”

The poetic anthology was coordinated by the professor of Ibero-American Literature of the Faculty of Philology of the Usal Francisca Noguerol, who offered the details of the selection that shows ‘You will see auroras of blood’. «Raúl Zurita is an extraordinary poet, one of the strongest candidates for the Nobel Prize in Contemporary Literature. Y This selection has been an exercise, not of work but of pleasure, because I was already reading it when I was 13 or 14 years old », explained the teacher.

Regarding the title chosen, Noguerol acknowledged that it takes its name from one of Zurita’s most significant verses, offering the contrast of the term “auroras”, understood as “a positive concept that offers the possibility of the future”, as opposed to “the violent connotations of the term blood ». About the poet, with 50 years of active experience, he highlighted his engineering studies since “construction is a fundamental part of his writing.” “My choice of poems is based on the conviction that the car mutates throughout his work,” he specified.

Likewise, the professor in Ibero-American Literature acknowledged that the author was “tremendously generous” by making him “solely responsible” for the choice, but thanked him for having given him “a lot of help” in preparing the synthesis. It shows in constant renewal and can only be understood in motion, ”he explained. Finally, Noguerol acknowledged that “the rhetorical questions asked by those who have no voice take on special importance,” highlighting the social dimension of Raúl Zurita.

As an added value, he highlighted that the author includes three unpublished items in this anthology that appear in their typewritten version.

The initial intervention was carried out by the president of National Heritage, Llanos Castellanos, who had words of gratitude for the University of Salamanca for its work in coordination with the institution that it represents in the organization of the Reina Sofía Prize for Ibero-American Poetry. «This award highlights the value of the written word, both in Spanish and Portuguese, and that unites many people. I would like to recognize the value of Zorita’s verses, since the written word is capable of creating friends even though oceans separate them, because you recognize yourself in the soul of the one who writes, “he valued.

The presentation ceremony of ‘Verá auroras de sangre’ was led by the rector of the University of Salamanca, Ricardo Rivero, who acknowledged that before awarding Zurita the Reina Sofía Prize for Ibero-American Poetry his name already “sounded strongly” in the Faculty of Philology, for the value of his work and for his link with the professors.