Ronaldo defends having a salary as president of Real Valladolid: “I have not received a single euro” 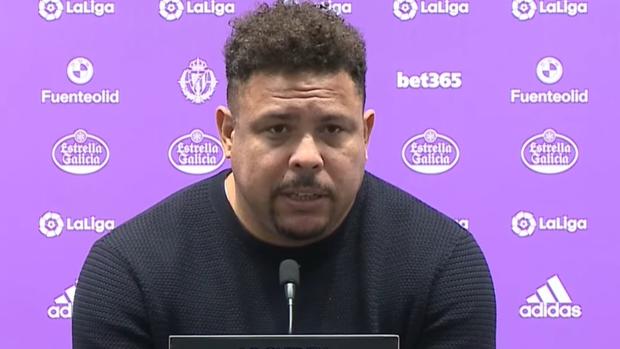 The president of Real Valladolid, Ronaldo Nazário, defended this Tuesday, at a press conference, his economic remuneration as manager of the Blanquivioleta club, which will be approved at the next Shareholders’ Meeting and recalled that he has been “more than two years without receiving or one euro”. «I have not received a single euro in these more than two years and now I understand that the club’s situation is more comfortable and, since I am working on it, developing its brand and carrying out new projects so that it acquires more value, it is natural that it charges », Has raised according to Efe collects. Ronaldo, who has appeared before the media at the José Zorrilla stadium, has been close and talkative, and when asked about the possible incursion of a Venezuelan shareholder in the club, Danielo Díaz Granados, a “close friend”, has assured that “Does not know that participation.” As for the company Tara Sport, a company of which he is the sole shareholder and which is present in the club’s shareholding and with which he requested a loan of 9 million euros, he has argued that it was a matter related to his « personal investments ”. «If as you say, the accounts are public, put what you want. Step of your questions, “he answered when asked about that issue, after previously ensuring that” he did not “ask for any loan when he bought Real Valladolid, but that he paid it” with his assets “because it was a” one hundred percent “bet of his . As for the banner that was placed at the José Zorrilla stadium, calling for Sergio to leave and Ronaldo was called for “less tennis and more football,” he maintained that “the club is where the channel connects, through from which everyone can express their complaints and suggestions, and nothing has come of this. «I think that people have to be happy with what has been achieved in these years, all the changes that have been made, both in the structure, in the image and in the sports field, with the completion of works in the stadium and Annexes and you have to remember how you were when I arrived, “he indicated. The president of Real Valladolid has admitted that “in First, the income is higher and, in terms of sport, going down to Second would also mean a loss in investment, but I prefer to live in the moment and I trust that we will continue in First. In fact, there is a team to fight to be higher and have a positive surprise. Regarding the winter market, he has warned that “if the sports management and Sergio González consider that it is necessary to sign, it would be studied”, while clarifying that, if he has come less to Valladolid it has been because “there is a pandemic” that He has made “collect more”, but “never” has stopped “working for the club.” Ronaldo has also clarified that Carlos Suárez “continues to be honorary president” of Real Valladolid and, therefore, “continues to be linked to the club” and that Borja Fernández “is a friend and a club man who is preparing to enter to perform another function in the club ”and therefore they are“ waiting ”. Finally, the Brazilian has cataloged the issue of the José Zorrilla Stadium as “very important”: “We continue to want the Stadium as property and we continue to speak with the City Council. We have more or less an offer, but it seems too expensive. At that price, we should build a stadium from scratch. That is why we want to show the City Council that the only use of the stadium is us. Very few renovations have been made since 1982. ‘