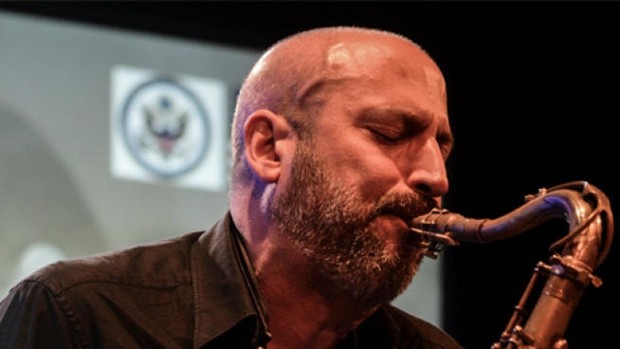 Saxophonist and clarinetist Bob Sands, one of the key figures of jazz in Madrid and by extension in Spain, has died at the age of 55. The cancer he suffered from had been looking bad for a long time, and that is why a month ago a tribute concert was held at the Reina Victoria Theater, in which his quartet became a sextet with Israel Sandoval, Javier Colina, Jorge Pardo Cordero and Cecilia Krull joining Pablo Gutiérrez Calvo and Dani García Bruno. The 17 members of the Bob Sands Big Band (BSBB) also participated, led on this occasion by Norman Frederick Hogue, and three other guests, Marina Ferrer Canal, Quique Gómez and Santi Cañada, who reviewed the maestro’s favorite songs in an evening that served to raise funds for his treatment.

But finally, Sands (New York, March 17, 1966) died this past Tuesday and his body was transferred to the San Isidro Funeral Parlor, where yesterday all his companions and friends gathered to say goodbye, and where he will remain until midnight. 13h today Wednesday. Many of them are also saying goodbye on social networks, such as Pancho Varona, who has launched this message: «I have been told that Bob Sands, a great saxophonist who belonged to Sabina’s band back in the year 2000, has passed away, I suppose. Tour 19 days and others. He was a great guy with a great sense of humor. And he played like god. I always remember him asking for air conditioning on the bus. It is terrible to remember the list of casualties of fellow musicians in bands of Sabina, Sergio Castillo, Javi Martínez, Marcos Mantero, Antonio Sánchez, Jimmy Ríos, Chema Rojas, José Romero, Javier Krahe, Bob Sands … what a band they will have formed far away ». The singer-songwriter Ismael Serrano also crossed his path, who has said: «I worked with Bob Sands on that memorable live show of ‘Principio de uncertainibilidad’, an album that we recorded years ago at the Lope de Vega theater in Madrid. What memories. What a pity”.

He began playing the tenor sax at age 9, and was taught by Ramon Ricker, Bob Mintzer, Bill Dobbins, Ray Wright, Al Regni, and George Coleman. In 1988 he obtained the Bachelor of Music Degree (Classical Saxophone) from the Eastman School of Music (University of Rochester). Three years later he earned a Master of Music Degree from the Manhattan School of Music with honors. In 1987 and 1988 he received the Honorable Mention Award from DownBeat magazine, and in 1991 he was awarded the H. Borden Award for outstanding graduate student in jazz, at the Manhattan School of Music.

Bob Sands came to our country in 1992, with the intention of traveling through Europe with his music and settling in France. But he fell in love with the city of Madrid and became a regular visitor to the stages of Bogui, Café Central and many other jazz clubs in the capital. In 1998 he recorded his first album as a leader in Spain for the Fresh Sound New Talent label, in which Albert Bover, Carlos Barretto, Philipe Soiratt, Perico Sambeat and Kurt Weiss also participated. As a leader he published albums such as ‘Jumpstart’ (Fresh Sound Records, 1998), ‘Musikene Big Band’ (Kutxa Records, 2008) or ‘Out and About’ (SteepleChase Records, 2013), and in addition to with Sabina and Ismael Serrano he worked with great figures of our music such as Miguel Ríos, Ana Belén, Marta Sánchez, Lolita, Martirio, Victor Manuel, Bertín Osborne, Natalia Dicenta, Paloma Berganza, Pedro Ruy Blas, Red House, Mikel Andueza or Joan Manuel Serrat, and he was an outstanding teacher and mentor to Spanish jazz musicians.

He has given master classes throughout the country, and worked since 2004 as a jazz, big band and combo harmony teacher at Musikene, the Official Conservatory of the Basque Country in San Sebastián. He was also a teacher of saxophone, flute, clarinet, improvisation, combo and big band at the Escuela de Música Creativa de Madrid from 1992 to 2005. Since 2011 he was a teacher of improvisation, harmony, combo and big band at El Molino Escuela de Artes, and since 2014, professor of Jazz Saxophone and Jazz Improvisation at the University of Alfonso X el Sabio.