Terry McAuliffe wants to be governor again. Women: Not so fast. 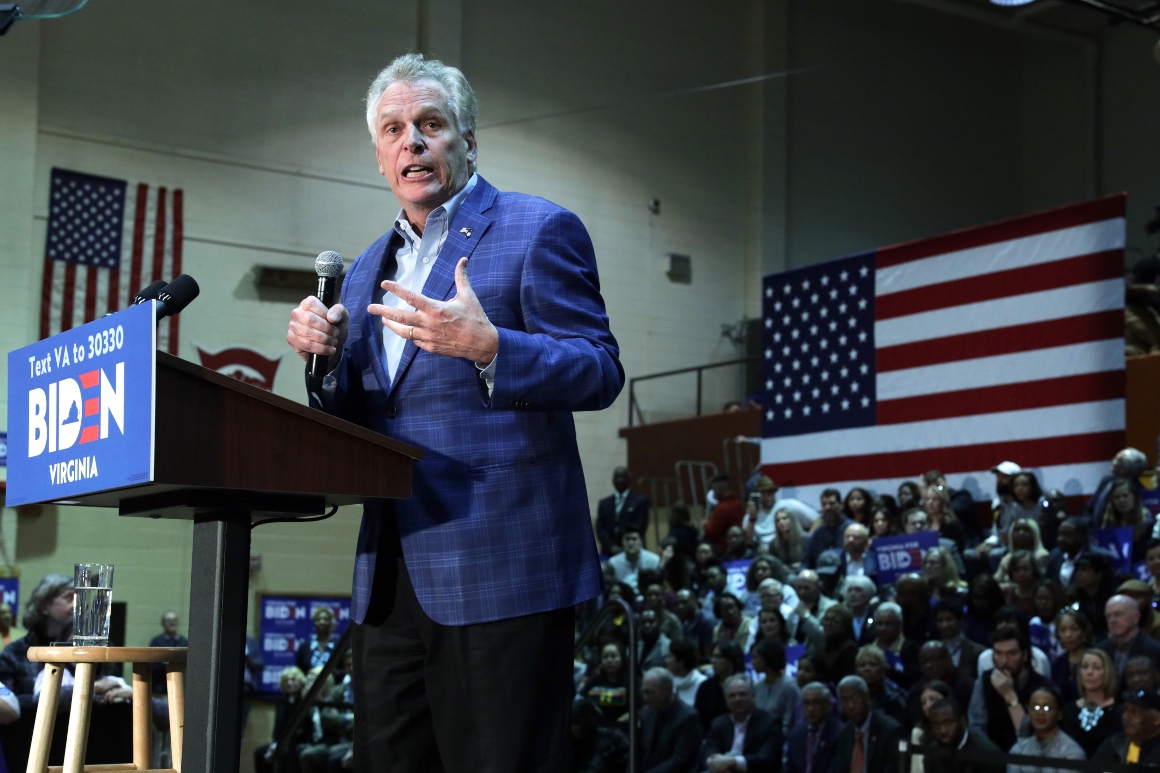 “And frankly, you’ve got two candidates that voters have an opportunity to elect at the office that both come from different qualifications, experiences, but particularly lived experiences as Black women. … I think voters are going to take a real hard look at the opportunity to do that.”

Next June’s primary in Virginia will mark the most significant intra-party clash for Democrats since last year’s presidential nominating contests and some in the party are urging progress for its most loyal voting bloc: Black women. There are only nine women governors in the country, none of whom are Black. In Virginia, where roughly one-in-five residents is African American, outgoing Gov. Ralph Northam and state Attorney General Mark Herring, two white men, have faced allegations of wearing blackface decades ago.

Carroll Foy and McClellan launched their gubernatorial bids within three weeks of each other earlier this year and have been working to shore up grassroots support from organizations and Democratic groups. They have already received dozens of endorsements from current and former elected officials. On Tuesday, Carroll Foy announced that she would resign from the state House to “focus 100 percent” on her campaign and avoid regulations that prohibit state lawmakers from raising campaign cash during the upcoming legislative session.

But both women face an uphill path in a growing field of candidates. In addition to McAuliffe, Lt. Gov. Justin Fairfax, who is Black, said he intends to run.

Fairfax has denied accusations that he sexually assaulted two women, one in college at Duke University 20 years ago, and the other while attending the 2004 Democratic convention in Boston. Three Black candidates in the race could split the votes, especially among African Americans, who account for more than a quarter of the Democratic primary electorate, creating an opening for a more well-known candidate like McAuliffe to win the Democratic nomination in the state.

After news of McAuliffe’s pending announcement, which was reported first by The Washington Post, Carroll Foy fired the first shots of the primary in a statement emailed to the press.

“While I respect Terry McAuliffe’s service, he doesn’t understand the problems Virginians face,” she said. “A former political party boss and multi-millionaire, Terry McAuliffe is simply out of touch with everyday Virginians.”

Virginia is the only state that limits its governors to only one consecutive term, and McAuliffe, 63, left the governor’s mansion after the 2017 election. Since then, the longtime Democratic powerbroker has remained active, even considering a 2020 presidential run.

McAuliffe, a close friend of the Clintons known for his fundraising ability, has said he would not pursue a position in the administration, another sign he’d seek to become Virginia’s first retread governor since Mills Goodwin switched parties to become a Republican and won a second term in 1973.

McAuliffe’s PAC, Common Good VA, raised nearly $2 million in the first half of 2020, according to the Virginia Public Access Project.

McAuliffe won the overwhelming support of Black voters during his 2013 run, and a handful of members of the state’s legislative Black caucus have already donated to McAuliffe’s PAC this year. Louise Lucas, the state’s first Black woman to serve as Senate president pro tempore, is among his most prominent supporters. In an interview, Lucas said she’s been encouraging McAuliffe to run for some time and expressed disappointment with those who have scoffed at his prospects in the face of two Black women candidates.

Part of the appeal for McAuliffe to return to the governorship, veteran Democratic strategists in Virginia say, is because he’d be able to accomplish more now than when he was first elected in 2013, since Democrats now control both chambers of the state legislature. McAuliffe supporters argue his track record as governor shows he’s best equipped to handle the pandemic and economic recovery in the commonwealth.

One Virginia Democrat who has been in touch with McAuliffe said the former governor would seek to elevate women to positions of power in Virginia, potentially backing a woman for lieutenant governor.

But Virginia’s recent reliably blue status — Joe Biden carried it by 10 points last month, roughly twice Hillary Clinton’s margin four years ago — is also why some Democrats say now is not the time for a McAuliffe comeback.

“I understand the desire for someone to come back and have a sequel, second chapter. But times change, and new leaders evolve,” said Susan Platt, a former Democratic candidate for lieutenant governor who recently started Her Excellency VA 2021, a group pushing for McClellan or Carroll Foy to win.

“This is not against any one man. This is for two very strong and capable women. It’s their time. Times have changed,” Platt said, adding that Virginia has not had a woman elected to statewide office since 1989. “That’s a long enough drought.”

Some Democrats and outside groups have also argued that Virginia is their best shot at making history with a Black woman governor.

“I think that the voters of Virginia have been very clear about the direction and the kinds of political leadership that they are asking for in this moment, and have been asking for,” said Adrianne Shropshire, executive director of BlackPAC. “I would just hope that, as folks are making their decisions that that is taken into consideration — the sort of importance and the significance of having diverse new voices in Virginia politics.”

“It would have to [have been] concluded by Mr. McAuliffe that things are in such dire shape, bad shape as far as the Democratic Party is concerned, that he has to do this — that he has himself considered the other candidates not worthy of the job,” Wilder said. “You just have to assume that. And the question then would be: Why?”

The “why” could be the party’s three current Democratic statewide officeholders: Northam, Fairfax and Herring. Northam’s embarrassing blackface episode — he first said he was photographed in a medical-school yearbook in blackface, then later backtracked and claimed he didn’t think the photo was of him — damaged his political standing midway through his term, though that is now a moot point, since he is barred from running again.

The sexual assault allegations against Fairfax emerged shortly after and could hamper any bid for a promotion. Herring, meanwhile, admitted to wearing “brown makeup” to impersonate a rapper as an undergraduate at the University of Virginia in 1980. He is running for a third term as state attorney general.

While McClellan and Carroll Foy have been coined by supporters as “the Jennifers” — both are attorneys born in Petersburg — their political profiles differ greatly. McClellan, 47, is more established, serving in the state legislature for almost 15 years. She’s previously received endorsements from more centrist Virginia Democrats — like Sen. Tim Kaine (D-Va.), himself a former governor — and led McAuliffe’s transition team in 2013.

Carroll Foy, 39, is a graduate of Virginia Military Institute and was first elected to the state House in 2017. She’s regarded as a more liberal candidate who will seek to push the state to the left.

“Terry coming into this race threatens … their ascension and victory in the primary. They don’t necessarily compete for the same voters naturally, but because of Terry’s presence in the race, they may,” said a veteran Virginia Democratic operative, who was granted anonymity to speak freely about the race.

“Having Terry is, unfortunately, pitting these two women against each other in a way that does a disservice to both of them,” the operative said.

Shropshire, the BlackPAC executive director, said that regardless of how they fare in the primary, the candidacies of both Carroll Foy and McClellan would be a “tremendous focal point for Black politics in the country.” She referenced Stacey Abrams’ failed gubernatorial bid in Georgia two years ago, when the Democrat finished only a point behind now-GOP Gov. Brian Kemp.

One of their victories, she said, would “ensure that we got in 2021, the first black governor, a woman governor, in the history of the country, as a prelude to getting the second black woman governor in Georgia in 2022.”