The bottle, an object of reflection 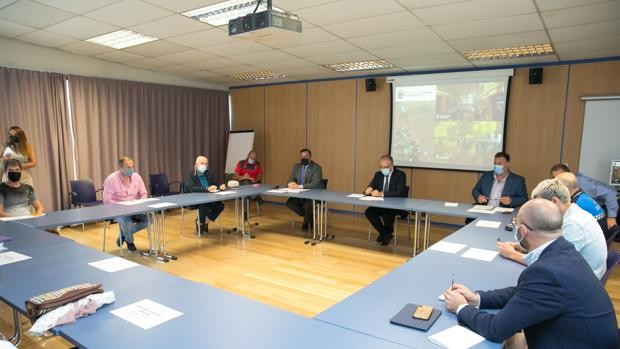 Young people, neighbors, hoteliers and institutions this afternoon shared proposals to find a joint solution to the coexistence problem posed by the bottle. The Mayor of Pamplona, ​​Enrique Maya and the Minister of the Presidency, Equality, Public Function and the Interior, Javier Remírez, presided over a first working meeting on this phenomenon under the slogan ‘The bottle. Reflections and solutions to a coexistence problem ‘. Among the issues analyzed, the influence that the pandemic may have had on some behaviors, the possibility of returning to standard hospitality hours, the need to work for alternative leisure for youth and the requirement to comply with the law. The Pamplona City Council and the Government of Navarra have worked in a coordinated way in a group that also includes the psychologist Emilio Garrido and the head of the Pamplona Municipal Police, Javier Goya, together with representatives of the Youth Council of Navarra, the Pamplona Youth Table; the Convivir en lo Viejo association; spokespersons for the Yamaguchi neighborhood and the hospitality sector. And it is that the background of these specific events, alcohol-based leisure, has occupied part of the debate. After this initial session and with the idea of ​​looking for stable solutions to the phenomenon of the bottle understood not only as alcohol intake in public space, but also as the situations that it produces (crowds, annoyances and dirt), the meeting ended up evaluating the possibility to keep this working group active in the format considered most efficient, including the presence of experts. A social and legal problem In general, the meeting has agreed on the idea that returning to the old hours and conditions of the hotel industry and the reopening of youth leisure spaces (known as ‘piperos’) will result in a greater distribution in the time and space of the population and the bottles and their problems will probably decrease. The session analyzed the influence that the pandemic may have had on some behaviors, mainly on the violent responses of the young people involved. The neighborhood representatives claimed that, beyond what happened in recent days, the bottle, as a problem of coexistence, is a structural challenge and, in that sense, the participants have analyzed alternative leisure proposals for youth, such as the related with gaming (digital games), valuing the need to involve young people themselves in the design of alternatives. In any case, in the field of strict compliance with the law, a balance has been made of the police actions of the last three weeks. It has intervened in 131 bottles in Yamaguchi and Pio XII, Old Town, Ciudadela and Vuelta del Castillo and San Juan, in addition to 40 parties in flats and 56 fights in nightlife areas. 10 complaints have also been filed against hospitality establishments. In this sense, the City Council has recalled the need to comply with current regulations (prohibition of taking drinks out of establishments, keeping doors closed, that the activity of the premises coincides with their license, etc.). Likewise, it has been debated in that forum about the convenience or not of having a regulation on the bottle that includes the restriction of selling alcohol in shops after certain hours.