The debt drama that masked a brutal power struggle: Schumer vs. McConnell 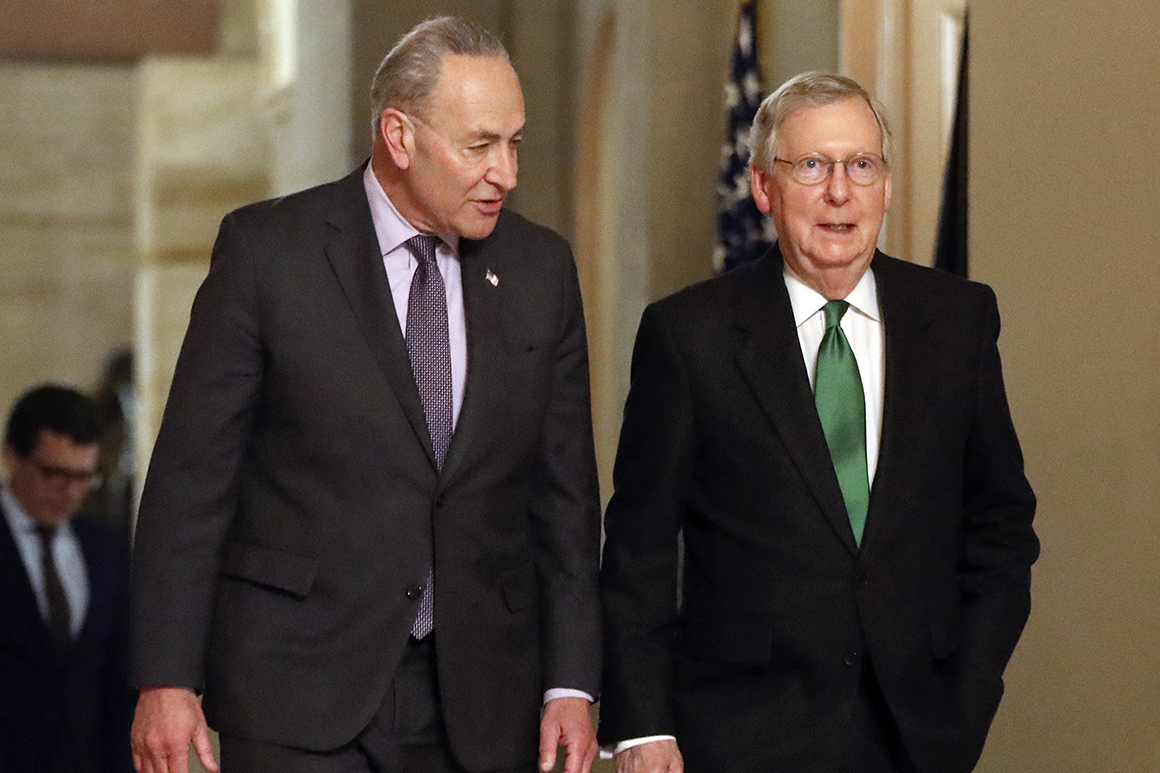 The majority and minority leader are perpetually angling for advantage in the longest-running 50-50 Senate in U.S. history, and their cage match over how to raise the debt ceiling is just the latest bout since McConnell refused to let the chamber organize after Schumer took over. Their ice-cold relationship lacks the sizzle of McConnell’s tiffs with former Senate Democratic leader Harry Reid — but McConnell is using increasingly hardline tactics to make Schumer’s life more difficult, given the chamber’s close margin and the tension among the disparate ideological wings in his rival’s party.

Both liberals and conservatives were unhappy at first about the debt fix, with the latter griping that McConnell had backed down and the former frustrated that Schumer didn’t push harder for a long-term solution that would strip Republicans of leverage. But Schumer looked far more like a winner by Thursday night, as Republicans fought among themselves over taking up the deal McConnell had cut and the final vote nearly got derailed.

“Now he’s the one that’s in a caucus meeting trying to corral people to get their votes together,” said Sen. Tammy Duckworth (D-Ill.). When the next collision comes in December, she predicted, it won’t be “about what he allows. He’s not in the majority.”

Regardless of the votes he provided to advance the debt deal Thursday night, McConnell’s motivations are clear: He’s scrapping for any possible advantage he can claw away from Schumer to net a single seat and take back the reins of the Senate, even if it brings the nation closer to an economically paralyzing default. Schumer’s task is trickier: He’s trying to juggle the competing imperatives of standing up to McConnell and keeping his caucus together as it battles over how big to go on President Joe Biden’s agenda.

In this particular conflict, McConnell was trying to goad Schumer into using the arcane budget reconciliation technique to raise the debt ceiling, forcing Democrats to raise the cap to a certain number. Schumer refused, and despite McConnell’s offer for a temporary hike that’s conditional on raising the debt ceiling again come December, Democrats say they won’t choose reconciliation then either.

In part, it’s because Democrats are going all-out to refuse McConnell’s direction. Several senators said privately that Democrats have held the line against reconciliation because it’s what McConnell wants. He also asked them to drop the debt ceiling from a spending bill last week — and after Democrats made that accommodation once, they don’t want to repeat it.

When it comes to McConnell trying to run the Senate, “he may try, but he won’t succeed,” said Sen. Richard Blumenthal (D-Conn.).

“Mitch McConnell has so infected the debt ceiling issue with political self-interest,” Blumenthal said. “He wants to be majority leader. That’s his goal.”

Schumer, of course, wants to stay majority leader in 2023. But he’s chiefly seeking to exploit the interim debt fix to finally clinch a deal on the party-line social spending bill that’s sparked a feud between his centrists and his liberals.

Yet Schumer’s crowing over latest confrontation with McConnell irked Manchin, a vote he can’t afford to alienate. As Schumer criticized Republicans on the floor for threatening default and praised his caucus for saving the country, Manchin buried his heads in his hands. He then talked to Schumer about what he saw as inappropriate remarks.

“That was not a way to take it out. We just disagree. I’d have done it differently,” Manchin said.

Some Democrats on Wednesday blasted McConnell’s offer before meeting privately as a caucus, then emerged from that sitdown to declare they had bested their perpetual foe. After Schumer contended to Democrats that McConnell “blinked” on Wednesday afternoon, Duckworth said, he was able to get his caucus on board with his strategy.

“It’s not a solution,” said Sen. Mazie Hirono (D-Hawaii). “What this does is allow us to focus on getting the president’s agenda done.”

Democrats will have to act fast to avoid being dragged down again into fiscal quicksand. That’s because, as much as the GOP leader struggled on Thursday getting his conference to accept a provisional detente, advisers say he’s got a larger strategy in mind.

McConnell was eager to tie the debt ceiling to the expiration of government funding on Dec. 3, sapping energy from Democratic majorities by creating new deadlines for them to confront. Some of his conservative members may not have liked the offer he made to Schumer this week, but it got him closer to that goal.

Given that Democrats have three scheduled recesses before the new debt deadline, it won’t be long before McConnell again begins pressuring them to raise the ceiling through reconciliation. Not to mention that Democrats had to put a number, $480 billion, to this week’s increase — and possibly the next one too.

Several more centrist senators are exhausted by the back-and-forth over who won the debt fight. There’s another deadline around the corner, and both Schumer and McConnell remain at odds over how to raise the borrowing cap then.

Many Democrats are ready to toss the entire notion of the debt ceiling legislatively overboard. But until then, they’re willing to take a breather after McConnell offered a lifeline that Schumer grabbed, no matter how messy their parliamentary mano-a-mano became.

“I know a lot of my colleagues are saying the other side caved,” said Sen. Mark Warner (D-Va.). “I think rationality won.”

Caitlin Emma contributed to this report.

The mysteries and symbols of the Camino de Santiago, according to Javier Sierra