The destruction of history in Colombia follows: “Colón, murderer” 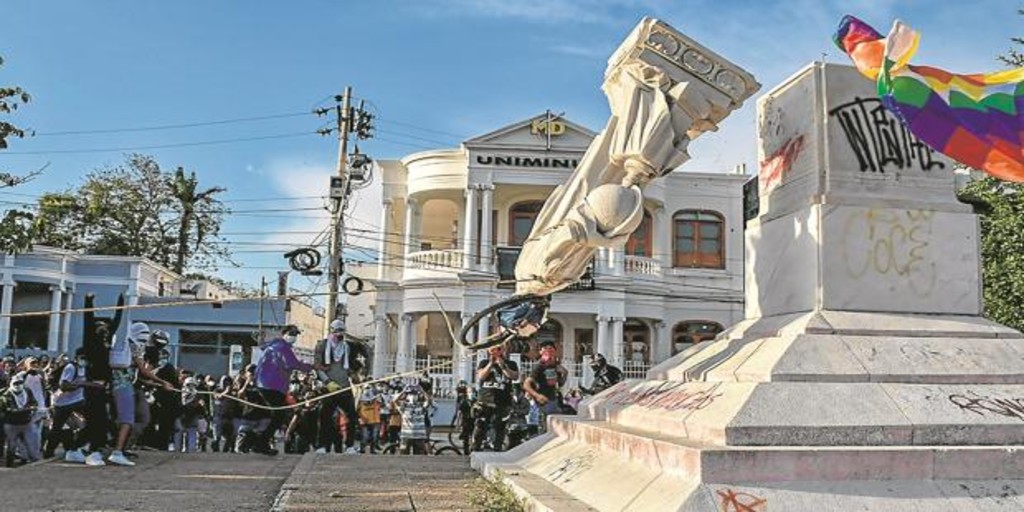 More than a century ago a statue of Christopher Columbus scrutinized from his pedestal the slow walk of the citizens of Barranquilla, on Colombia. Almost three meters of white marble that personified the navigator holding a world ball to his sinister, symbol of his key role in the discovery of America. Last Monday, however, this hundred-year-old figure joined the extensive list of effigies of the sailor who had been ruined on the other side of the Atlantic when a mob, stone in hand and hood over his face, knocked him down from his place of eternal rest to the sound of a Same phrase: “Columbus, murderer.”

The one in Barranquilla, capital of the department of Atlántico (north), is the last act of a play that has been staged over and over again in Colombia for a very short time. To be more specific, the two months that have elapsed since the mobilizations and strikes broke out in response to a tax reform project by the president, Ivan Duque. Since then the statues of Sebastián de Belalcázar, demolished at the end of April, or of Gonzalo Jiménez de Quesada, vandalized in Bogotá on May 8. A cloudy summer for a country that, until recently, was proud of its Spanish past.

When Jorge Luis Vargas placeholder image -Director of the Colombian Police- corroborated the attack, the images had already gone around the world through social networks. It took a few minutes for a bulky crowd to take over 56th Street with the 47th and 50th races between fights against the Spanish conquerors. After placing a rope around the neck and a black hood to the statue, the protesters attached several ropes to it and pulled them until it collapsed. Half a somersault later, the effigy of Columbus kissed the asphalt to be greeted with graffiti and graffiti in favor of “our dead.”

What the passage of time could not achieve was achieved by anger. Not happy with the demolition, the protesters beheaded the statue, donated by the Italian colony in 1892 to commemorate the 400th anniversary of the discovery of America, and dragged its head through the streets of Barranquilla like a trophy. For their part, the stragglers gave a good account of the limbs, made – like the rest of the effigy – in Carrara marble by the artist Giuseppe Tomagnini.

And, as always, after the storm came calm. When the crowd disappeared, city officials made an appearance, who in statements to several local newspapers have confirmed that they cleaned the pedestal, collected the pieces of the sculpture and began the search for experts capable of making Columbus shine again. . A difficult task, as explained Maria Teresa Fernandez, Department of Culture: «We are talking about a 129-year-old piece and its material is difficult to get. We are consulting to see if it can be done.

The attacks against the statues began on April 28, the first day of a generalized stoppage to confront the Government. That day, a group of Misak indigenous people demolished the sculpture of Sebastián de Belalcázar, founder of the city, considering him a genocide. Although some neighbors requested that he be relocated in his place, the mayor refused. Shortly afterwards the effigy of Diego de Ospina, the man who laid the first stone of Neiva, also fell. And like him, so many others.

The closest controversy in time occurred on June 11, when the Colombian Ministry of Culture withdrew the sculptures of Colón and Isabel la Católica from the city of Bogotá after a group of exalted people tried to tear them down. They did not care that the Queen was one of the greatest defenders of indigenous rights. Since then, the Government, which has charged against the vandals, has also started a dialogue to assess what to do with these monuments.