The givers parade through the Soho Theater in Malaga 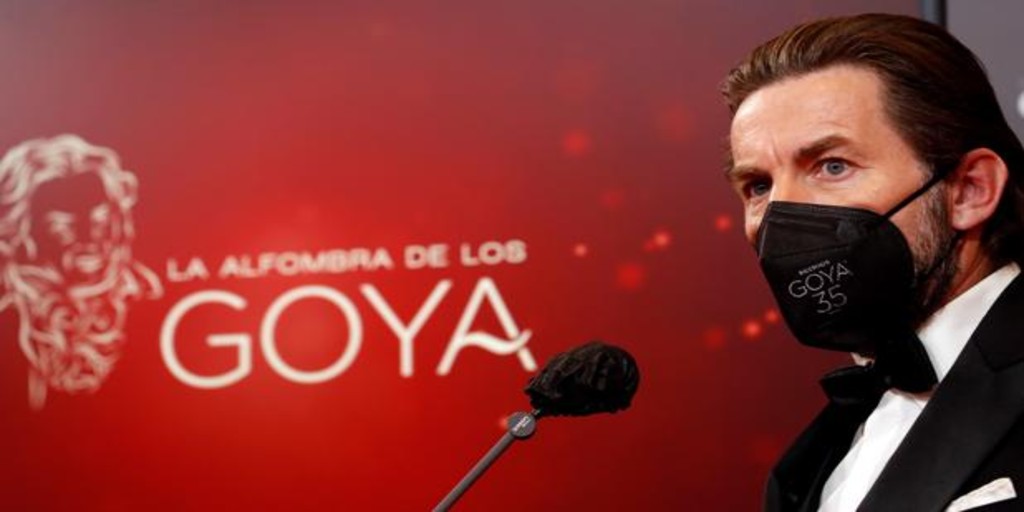 20.21Red carpet
Milena Smit, nominee for breakout actress for ‘You will not kill’: “Two years ago my life was totally different; I used to work in a hotel and now I’m sitting waiting for the gala. It is a dream that I could never imagine.

20.14Red carpetMario Casas, nominated for the first time for the Goya Awards for his role in the film ‘You will not kill’, has spoken with Elena Sánchez from his home. “I’m relaxed; when the gala starts I’ll get a little more nervous, “said the Galician. “I will spend the night with part of my family, which is what gives me the most support.”

20.12Red carpet
Tristán Ulloa, recovered from the coronavirus that left him offside last year, applauded that these awards can be held: “I am very proud to feel part of this family.”

20.09Big prize
The main award of the night, the most important Goya of this pandemic edition, will not be awarded by any name in Spanish cinema but by a nurse, a tribute from the homeland industry to those unknown heroes who stood up when the coronavirus came into play.

20.08Red carpet
Verónica Echegui is nominated for best supporting actress. Perhaps, finally, it will be the turn of the eternal Goya candidate: «With the Goya you never know but I already feel rewarded. It is being nice, because when I prepared the character I did not expect this to happen so I am on a ‘bonus track’ now », said the actress, who has dared to hum the song from the film ‘Explode, explode’.

The singer Aitana, from ‘Operation Triumph’, makes her debut at the Goya with a performance that, she has confessed, Antonio Banderas has expressly requested: “I’m quite nervous and I think it’s going to surprise you,” said the artist, who only revealed a detail: “It’s a classic, that’s the only thing I can tell you.”

20.04Red carpet
“People who are at home are going to celebrate and it will be something beautiful,” said Belén Cuesta, one of the show’s entertainers.

19.23Red carpet
David Pérez Sañudo, director of the film ‘Ane’. talks about being the ‘covered’ tape of the Goya: «We have already won; The pressure is on Patricia, where we think the fight is. He is aware that taking the big head is complicated, so he is satisfied with the mention and recognition of the nomination against such worthy rivals. “Winning is very complicated; there are other favorites »

18.43Will the Goya take?Mario Casas breaks his curse at the Goya Awards. This 2020, Mario Casas has finally managed to break his curse with big heads. The actor, who has released three films and recorded a series this year, has won the long-awaited candidacy for the most important awards in Spanish cinema for the first time in his career for “You will not kill”, where he plays an extreme character in the opposite side to the youth idol that gave him fame and has marked his popularity.

18.37Films with the most Goya in history‘Sea Inside’, by Alejandro Amenábar, has held the record since 2004, with 14 awards out of 15 nominations. We review the Spanish films with the most big heads in their record.

18.36So are the nominees for the Goya
This Saturday, at 10 pm in La 1, the Goya Awards celebrate the great festival of Spanish cinema. We review the five titles nominated for best film through the reviews that we published on ABC at its premiere. ‘Adú’, ‘Ane’, ‘Rosa’s wedding’, ‘The girls’ and ‘Sentimental’. María Casado and Antonio Banderas will be in charge of presenting a party in which Aitana, Vanesa Martín and Nathy Peluso will perform.

18.34Interview with Salvador CalvoWith 13 nominations, the filmmaker, nominated for ‘Adú’, seeks to win his first great Goya after leaving empty with ‘The last of the Philippines’: “I still don’t have any awards, I need the final recognition.”

18.31The favorites, according to the poolsWho will win the most important Goya awards? Before the gala begins, the bookmakers already have it clear. ‘The girls’, after winning the Forqué and Feroz awards, is the favorite movie to take the big head, according to the predictions.

18.29International actors in the Goya
Antonio Banderas has drawn influence for the Goya gala. Despite being telematic because of the coronavirus, the actor has managed to get Robert de Niro, Al Pacino, Dustin Hoffman, Charlize Theron, Isabelle Huppert or Monica Bellucci, among others, to be present at the gala and send their messages of support to the cinema Spanish.

18.27Interview with Isabel CoixetThe director returns to the Goya family after the success of 2018, when she won best script, direction and film with ‘The Library’. A regular at the gala, she is nominated for best director for her work in ‘Nieva en Benidorm’: «I have been able to continue in the cinema because many academics have voted for my films for many years».

18.25Presenters of the GoyaThis year the gala will be presented by Antonio Banderas and María Casado, as confirmed by the Academy of Motion Picture Arts and Sciences of Spain, organizer of the awards, in an act that will take place centrally at the Soho Theater in Malaga.

18.23All Goya nomineesBefore the Goya 2021 awards gala this Saturday, we compiled the critics of the five nominated films and the interviews that we have carried out with four of the directors who will star in the night: Pilar Palomero, the young debutante who with ‘The girls’ arrives as a favorite; Salvador Calvo, director of Adú, the film with the most nominations; Icíar Bollaín, who returns to the Goya after a decade thanks to the 8 nominations for ‘Rosa’s wedding’; and Isabel Coixet, the director who seems to always have a fixed seat at the gala.