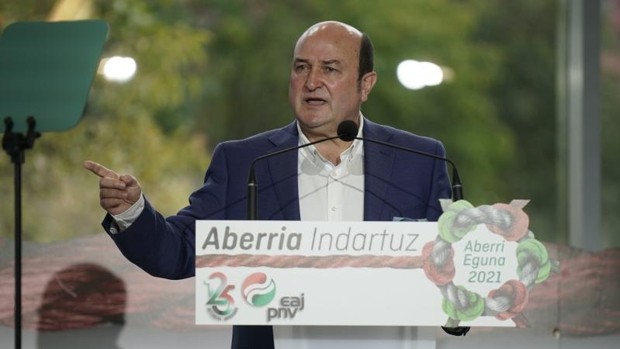 The president of the EBB of the PNV, Andoni Ortuzar, does not believe that, from the meeting between the Prime Minister, Pedro Sanchez, and the president of the Generalitat of Catalonia, Pere Aragonès, “very great news” comes out today, but it is the beginning of the search for solutions through dialogue, after “such a great disagreement, such a thick judicialization of politics, so much empty talk, so much threat and of so much flames ».

In this sense, hopes that in a few months there will be a proposal that “is acceptable and accepted by the majority of the Catalan people”. In addition, he has opted to “seek a solution similar to that of pardons” for Carles Puigdemont and the entire “group” that has been left out of this measure.

In an interview with RNE, collected by Europa Press, Ortuzar referred to the first formal meeting this Tuesday in La Moncloa between the President of the Government, Pedro Sánchez, and the President of the Generalitat de Catalunya, Pere Aragonès, after the concession of pardons to nine independence leaders.

The jeltzale leader has been convinced that this will be the first of “many more meetings”, and does not believe that today “great news” can be expected. In this sense, consider that today a calendar of meetings can come out and «the expression of a political will by both parties to dialogue, although the starting positions are very remote ».

In his opinion, with dialogue, “everything is possible”, and considers that in the relationship between Catalonia and the State “there has not been enough dialogue so far”. “Hopefully it starts now and solutions are sought, that judicial sentences, prosecutions and all the mess that we have experienced, have not been able to find that way,” he added.

On the images that have been seen at the Mobile World Congress in Barcelona with Aragonès, Sánchez and the King Felipe VI, and today’s meeting between the presidents of the central and Catalan governments, has indicated that it was coming from “such a great disagreement, such a thick judicialization of politics, so much empty talk, so much threat, so much sophistry , what the most normal gestures seem extraordinary ».

For Andoni Ortuzar, “you have to be educated and maintain that institutional relationship as normal as possible.” “I understand that there will be people in Catalonia that squeaks, but I think they are doing well (the president),” he pointed out.

The role of the PNV

The president of the EBB has affirmed that his party “accompanies” this dialogue between both parties because the PNV “is here to help.” «We are a party of dialogue, we are a party of agreement. We have our political ideology, we also have our demands, we want more self-government and better quality, but we like that these political processes are carried out from the dialogue and from the agreement, “he said.

Along these lines, he explained that they have missed, in all this time, a “more open position, more dialogue and less of imposition from Madrid with Catalonia and this is taking place.” “For our part, it is not only welcome, but to the extent that we can help and that they ask us, we will help everything that is told to us,” he said.