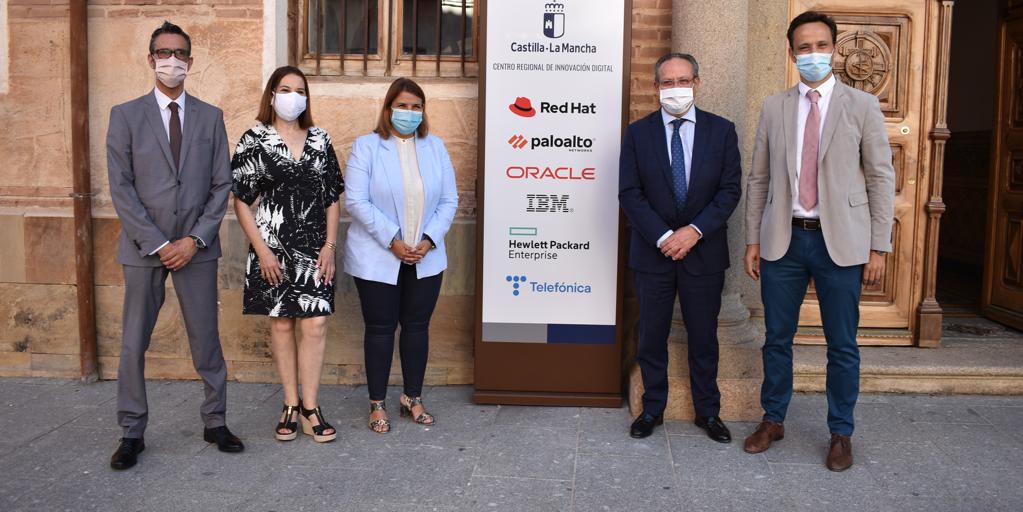 The Government of Castilla-La Mancha and Telefónica have signed this Wednesday a collaboration agreement for the start-up, in the Regional Center for Digital Innovation located in Talavera de la Reina, of the hub of entrepreneurship ‘Talavera Open Future’, which aims to strengthen the business fabric of the region under an innovation model based on entrepreneurship.

The Minister of Finance and Public Administrations, Juan Alfonso Ruiz Molina, and the general director of the Central Territory of Telefónica, Beatriz Herranz, have signed this agreement, which will promote collaboration between both parties for the development of this initiative, through which calls will be launched for the participation of entrepreneurs in the open innovation program of this company to support entrepreneurship.

After visiting the facilities of the Regional Center for Digital Innovation, accompanied by the head of the Territory Center of Telefónica, and the mayor of the city, Tita Garcia Élez, Ruiz Molina has ensured that the Regional Center for Digital Innovation, promoted by the Government of Castilla-La Mancha, “is consolidating itself as one of the new engines of technological innovation in the autonomous community.”

The counselor recalled that today it was published in the Official Gazette of Castilla-La Mancha the Law on urgent measures to streamline and simplify procedures for the management and implementation of the European Recovery Funds, which has among its priority objectives to accelerate the technological and digital transformation of the region, “reinforcing the competitiveness of our economy” and with the that, in addition, this space is endowed with its own legal entity as a center for research and development of solutions in the field of technology and telecommunications.

“Little by little we are seeing the light at the end of the tunnel,” continued the head of Finance and Public Administrations, who has highlighted the need to transform the waves of infections by Covid-19 into “a wave of illusion and hope for the future.”

In this context, it has framed Telefónica’s ‘Open Future’ program, which it has defined as “a start-up developer, through which this multinational will put its entire international network at our service.” Likewise, he has indicated that “the most important thing” is that he is going to put entrepreneurs in the region in contact with entrepreneurs who are committed to the projects that are developed in this space.

Ruiz Molina has also pointed out that ‘Telefónica Open Future‘”Fits perfectly” with the digital strategy of the regional government, which aims to advance in the process of digitization of the regional administration, reduce the digital gap of citizens and companies, facilitate environments that allow new technologies to be a source of knowledge and innovation, to be an effective tool to fight depopulation and create qualified employment.

In the same vein, the general director of the Central Territory of Telefónica has pronounced, for whom, with this initiative, Talavera becomes «the new epicenter of regional entrepreneurship and an example of the public-private collaboration that we have maintained for years with the Community Board of Castilla-La Mancha and the City Council, thanks to whose impulse the city has become a technological benchmark by attracting important companies ”.

This has allowed, he said, that the region takes “an exponential leap in its connectivity”, with Talavera as the first 5G technological city and pilot of important projects such as the connected car, while highlighting that from ‘Telefónica Open Future’ ” we generate opportunities, we consolidate professional projects and we contribute to the development of the business fabric in Castilla-La Mancha through entrepreneurship projects associated with innovation and technological development ». “At Telefónica we have always believed in the capabilities of this country and of this autonomous community to be a reference for entrepreneurship,” he concluded.

For her part, the mayor of the city has been convinced that this company’s program will guarantee the development of many ideas and has asserted that it is “an opportunity” for all those who want to start a technology business.

García-Élez, who has highlighted the importance of public-private collaboration, has also advocated “going hand in hand” with those who train to retain the talent that is generated in the region and has celebrated that Talavera is “on the map of technology and innovation ”.

‘Telefónica Open Future’ is an initiative that was born in 2014 as an engine for the generation of employment and the creation of regional entrepreneurship ecosystems in Spain, locally promotes technological innovation projects and helps the creation of digital and disruptive companies. Since its launch, it has supported more than 800 start-ups, which have created more than 4,000 jobs in eleven autonomous communities.

Currently, there are about twenty spaces such as the ‘Talavera Open Future’ that exist in Spain, in which entrepreneurs can exchange ideas and work in a network, thus contributing to the growth of the regional economy and locally supporting projects technological innovation and the creation of digital companies in different sectors.