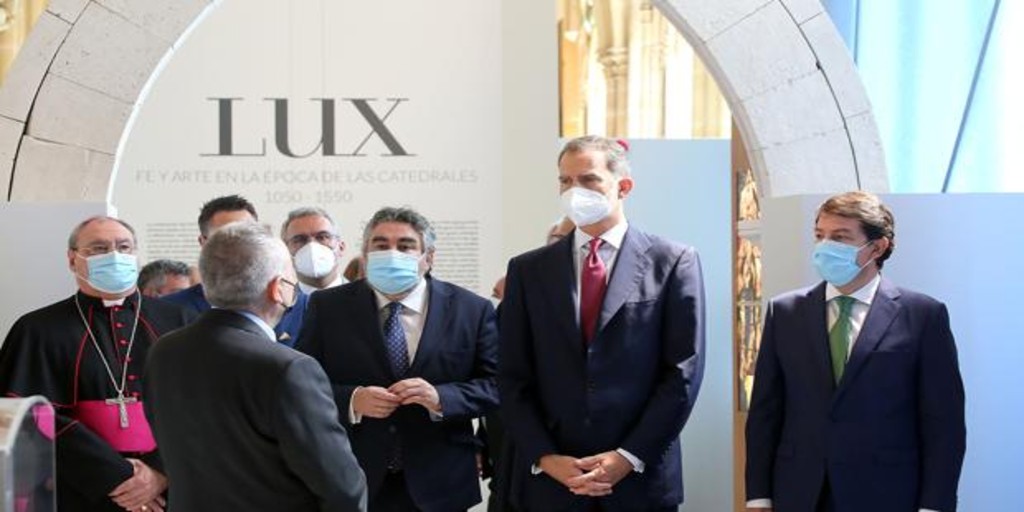 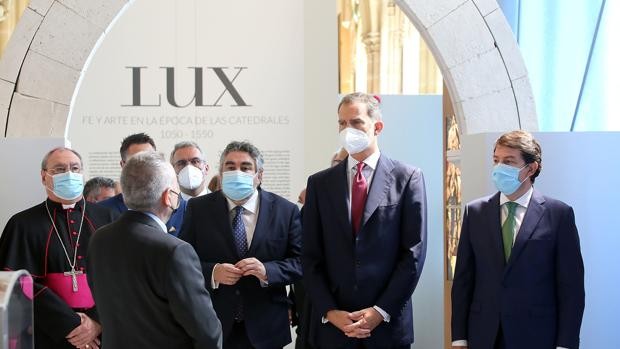 After its inauguration yesterday by His Majesty King Felipe VI, this Wednesday the most “atypical and ambitious” edition of The Ages of Man opens to the public. On this 25th occasion, it has been decided to distribute the sample of sacred art, under the name of ‘Lux’ in three locations: The Cathedral of Burgos, Carrión de los Condes and Sahagún; three milestones of the Camino de Santiago. There are several keys to understanding this macroexposure. On the one hand, Las Adades try to explain the origin and meaning of cathedrals through the 120 pieces gathered in the Burgos cathedral. This is the most extensive of the three samples, and several are its reference pieces, among them two replicas: that of the stained glass window of the Cathedral of Salamanca, which is the general image of this edition, and that of the arch that led through the Palace Archbishop to the Cathedral, which was withdrawn in 1900 when the palace was demolished. Essential to understand the storyline that links the exhibition project with the other sub-sites is the closing of the exhibition in the seventh chapter, dedicated to the Virgin Mary, which ends in the Valentí Palencia Room of the Lower Cloister of the temple with a sculpture of the Virgin from the fourteenth century of the Cathedral of Ávila. Another of the peculiarities of this macroproject that differentiates it from previous ones in Las Edades is the number of works collected from other Spanish SEOs. Thus, it includes several especially relevant pieces from the Cathedral of Toledo and a wooden throne from the fourteenth century given by the Episcopal See of Gerona, among others. They are joined by other pieces generally inaccessible to the public, such as the Guardian Angel of the City, since it is usually found in the highest part of the altarpiece of the High Altar of the Burgos temple, in the central nave. Along with the Guardian Angel, these are some of the main “jewels” of ‘Lux’ that the visitor will find distributed by the three venues: 1) Replica of the Stone Arch of the Archbishop’s Palace: it was the arch that served as a connection between the Cathedral of Burgos and the Archbishop’s Palace, which was demolished in 1900. It serves as the entrance to the exhibition of The Ages of Man. Twelve workers in search of a leader 2) ‘Twelve workers in search of a leader’, by the Canarian artist Juan Bordes. It is an impressive and very striking sculpture that can be found in the first of the seven chapters of the show in the Cathedral. It is the only modern work. 3) Wooden throne of the episcopal see of Gerona. Large work carved in wood, from the 14th century 4) Stained glass window of Santa Catalina. It is a work by Arnao de Flandes, made in the 16th century and restored a few decades ago. It is from the same period and author as the replica of the stained glass window in the Cathedral of Salamanca that stars on the cover of the guide for this edition of The Ages of Man. It is usually found in the Cathedral of Burgos 5) Reliquary of the Holy Sepulcher of Pamplona. French goldsmith work from the 18th century 6) Virgen del Tesoro. From the Cathedral of Toledo and made in the 13th century. It is an anonymous carving in embossed wood, later, in silver. 7) The key figure of Luis de Acuña. Among the works of the Burgos seo stands out this relief with Luis de Acuña as the protagonist. This bishop was the founder of the Tree of Jesse Altarpiece, the work of Gil de Siloé. 8) An artillery tank from the 18th century. In addition to works of a religious nature, the Burgos exhibition rescues other elements to explain the history of the seo, the time in which it was built and its various vicissitudes throughout history. 9) Outstanding imagery in the Sanctuary of La Peregrina, in Sahagún. With the ‘Altarpiece of the Descent’, by Manuel Álvarez, the part of the exhibition located in the Sanctuary of the Pilgrim Virgin of Sahagún (León) begins a tour of pieces that represent this episode in the life of Christ within the framework of a story “That best sticks to the narrative of the facts.” 10) Maria on the Camino Palentino. Among the Marian work of the Carrión de los Condes sample, this beautiful polychrome carving by Juan de Juni called ‘Virgin with Jesus and Saint John children’ stands out within the chapter ‘Virgo et Mater’