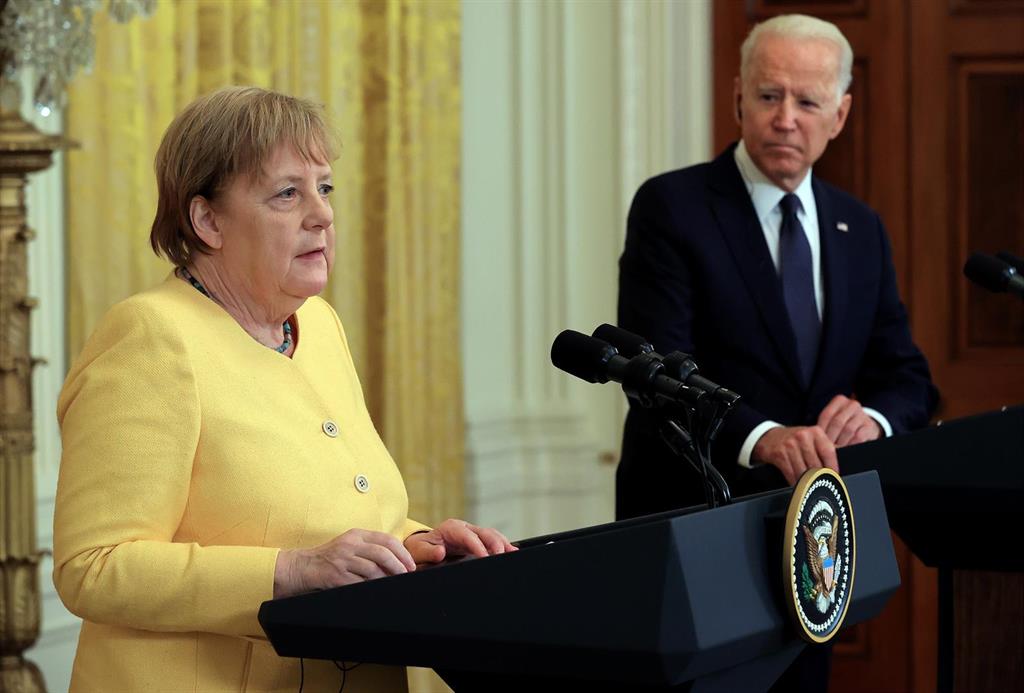 Russia condemns the “hostile tonality” of the US and Germany and notes that it “contradicts the spirit” of the Biden-Putin talks.

The United States and Germany have reached an agreement that will allow the completion of the Nord Stream 2 gas pipeline project that was initially opposed by the Administration of President Joe Biden, considering that it was an initiative that Russia could use to gain influence.

In a joint statement by the United States and Germany on supporting Ukraine, European energy security and climate goals, both countries have pointed to a “compromise” that is “designed to ensure that Russia will not misuse any oil pipeline, including Nord Stream 2, to achieve aggressive political ends using energy as a weapon. “

Likewise, a senior State Department official has indicated that while Washington continues to oppose the gas pipeline, which it describes as “a project of malicious Russian geopolitical influence,” it has reached “the judgment that sanctions would not stop its construction.”

“We risk undermining a critical alliance with Germany, as well as with the European Union and other European allies,” the senior official warned to defend the agreement, which includes taking “rapid measures” by Germany to prevent Moscow. use the project to increase Europe’s dependence on its energy supplies.

Specifically, Berlin has agreed to take a series of measures aimed at mitigating risks to energy security in Europe, Ukraine, and EU and NATO countries close to Russian borders. In the past, Russia cut off power supplies to other countries, including Ukraine, CNN has recalled.

The package of measures is designed to address “the root causes of those risks,” “Russia’s use of energy as a geopolitical weapon, and the vulnerability of countries like Ukraine, which depend on Russian gas and transit fees, to Russian evil activities “.

“Throughout this process, both we and our German partners have consulted closely with Ukraine and Poland, as well as other countries that would be adversely affected by this project on their concerns, which we have taken into account,” explained the senior official. American on the deal.

Likewise, he has referred to the fact that the joint declaration sends a “clear message” that the United States and Germany “will not tolerate Russia using energy as a geopolitical weapon in Europe or intensifying its aggression against Ukraine.”

“We are committed to working together with our allies and partners to impose significant costs on Russia, including in the areas of sanctions and energy flows, if it engages in these malicious activities,” he added.

Also, it has affected that both Washington and Berlin know that “it will take a lot of time and resources” for Ukraine to “end its dependence on Russian energy.”

In this regard, within the framework of the agreement, Germany has promised to appoint a special envoy and use “its available leverage in the period before the Nord Stream 2 project comes into operation”, with the aim of helping Ukraine to “negotiate an extension of its gas transit contract with Russia well beyond 2024.”

“This proposed extension, the negotiation of which the United States will actively support, would preserve gas flows and transit revenues that Ukraine could otherwise lose once the pipeline becomes operational, postponing the negative impacts of the pipeline on Ukraine and others. transit countries such as Slovakia, “said the senior official.

Regarding the agreed measures, the senior official said that as part of the Energy and Climate Partnership between the United States and Germany, the European nation has committed to creating and managing a Green Fund of 1,000 million dollars (more than 848 million dollars). euros) in support of Ukraine’s energy transition, energy efficiency and energy security.

“The objectives of the fund will be to promote the use of renewable energy, facilitate the development of hydrogen, increase energy efficiency, accelerate the transition from coal and promote carbon neutrality,” he said.

To boost this fund, Germany will provide an initial donation of at least 150 million euros and will work to extend that commitment into the next budget years.

According to the senior official, the United States will work with Germany to support the fund’s objectives with assistance programs and policy support, in addition to helping promote and support investments in the fund.

“In light of the adverse effects that Nord Stream 2 would have on the Central and Eastern European EU member states, Germany will also enhance its commitment to the Three Seas Initiative, with a view to investing in related projects or part of the initiative. This is in addition to the 1.5 billion euros that Germany will invest in energy projects as part of the EU budget between 2021 and 2027, “the senior US official also highlighted.

Finally, Germany has also committed to implementing “the letter and spirit” of the EU’s Third Energy Package regarding Nord Stream 2, which “will support the principles of diversity and security of supply within the energy markets of the European Union”.

“These measures will help prevent the worst case scenario: an unprotected operational Nord Stream 2 from its adverse effects for Ukraine, the front-line countries of NATO and the EU, and European energy security as a whole,” he insisted. the high official.

“The hostile tone directed at our country fundamentally contradicts the spirit of the talks between two presidents in Geneva on June 16,” he lamented in a statement collected by the Russian news agency TASS.

He has also criticized that “attempts” to present Moscow as an “aggressor” and a country “involved in evil activities” have become “for a long time” the “business card of the Russophobes.”

“The threats against us are unfounded and useless,” he continued, to defend that Russia “never” has inflicted deliveries of energy resources.

“We reject any accusation in that sense. We consider these attempts as nothing more than unscrupulous competition,” Antonov has sentenced.