“These demands can be visible and prudent” 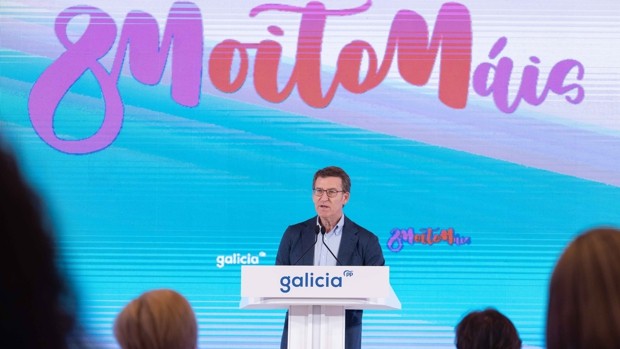 The president of the PP of Galicia, Alberto Núñez Feijóo, has shown in his speech this Saturday in an act of his party to celebrate 8-M his support for the celebration of events and demonstrations for 8M, always “with civic behavior” and “doing everything” what the health authorities dictate in the framework of the pandemic. These demands can be visible and prudent. Of course, complying with the sanitary measures, women can say and express what they consider appropriate «, has continued.

At this point, Feijóo has not overlooked that in the last “days” and “weeks” multiple mobilizations were authorized in which the participants neither fulfilled the distancing nor did they wear a mask, such as the march of denialist groups that took place two years ago. weeks in Santiago de Compostela.

For the president of the Xunta and the PPdeG, the acts cannot take place “without respecting the sanitary criteria”, because “life is fundamental and the basic principle of equality.” In fact, it has spoiled that last year the 8M demonstrations were authorized with “purely political criteria that did not take into account public health requirements.” “Now, that we have more information, I ask that any concentration or event be held in full compliance with the guidelines health to preserve life, because without life there is no equality, “he stressed.

Precisely, Feijóo has mentioned the pandemic as a demonstration that women “suffer more during crises, be they economic, social or health,” because a good part of the care work “continues to fall” on them. “There is still a lot of role discrimination within a household”, has explained, to show that “there is still much for real and effective equality” between genders.

In this act, the popular has praised the policies in favor of equality undertaken by his party in the Xunta in the last “30 years”, since the approval of the first equality plan by the then government of Manuel Fraga. In addition, he has charged against the two forces that make up the central Executive, PSOE and United We Can, for taking a year of “lessons saying that only those who are from a party defend women.” «Either you are a member of the Socialist Party or of Podemos or, if not, you do not defend women’s rights, Is there a more sectarian or unequal approach? «, Lamented the Galician president.

Moreover, as he has denounced, PSOE and United We can confront each other to “see who is capable of bringing the feminist claim to himself.” “A year, really, not working for equality, but nudging each other,” he summarized.

The president of the PPdeG has also criticized that the Ministry of Equality, in the hands of Irene Montero in the last year, It was “more times in the news for the scandals” and “internal struggles” than for its “policies.”

All this has been stated by Feijóo during a party act to commemorate March 8, Women’s Day, which has been held at the Hotel Eurostars de San Lázaro, in Santiago, with the general secretary of Igualdade de la Xunta, Susana López Abella, as presenter. Members of his government have also attended the event, such as the Regional Minister of Emprego and Igualdade, María Jesús Lorenzana.

By way of closing, the leader of the popular Galicians he has advocated “adding” against the intention of those who “bet on confronting women.” Next, he has taken the opportunity to charge against the political forces “that deny” inequality, machismo and the murders that this entails.

“Questioning the need for equality is an obligation of all, and recognizing that we still have problems of inequalities is a challenge for all,” he proclaimed below. At this juncture, Feijóo has recalled the 12 years since he acceded to the Presidency of the Xunta, to which he has added the previous four years in the opposition and another two as councilor of Fraga. Thus, she has vindicated the 18 years in total that she has been “working” for equality and celebrating Women’s Day.

That said, it has highlighted the “seven equality plans” promoted by the regional government, after the approval of the first 30 years ago, which put Galicia at the forefront “of the European regions”, as it has assured.

Not surprisingly, he has praised that “the house of the Popular Party of Galicia” is “wide”, since its formation is not interested in “who votes” each person. Of course, he has boasted that, according to studies and surveys, “it seems that women vote more for the PP than men.” “And I am happy, because thanks to them we can be governing Galicia,” he added.

To begin his fourth term, Feijóo created the Department of Emprego and Equality last September, which fell to María Jesús Lorenzana. In the act of this Saturday, the president has erected this department as “a contribution” of the Galician PP to the equality policies of the whole of Spain. Faced with a context of economic and social crisis as a result of the pandemic, he said that “the logical thing” was to unite both branches, because “there is no equality without employment and there is no employment without economic activity.”

The PSdeG has brought together in Santiago different women with representative positions in mayors, councils, the Parliament of Galicia and in Congress to urge society and public powers to return to put the feminist agenda at the center and to claim the link between this training and historical advances in the field of Equality.

The act served to present the poster and the party’s motto for March 8 ‘Essential and unstoppable’ and there they met, in addition to the general secretary, Gonzalo Caballero, the president of the Deputation of Pontevedra, Carmela Silva, the mayor of Lugo, Lara Méndez, the general vice-secretary of Equality of PSdeG, Icía García, or the deputies and parliamentarians Pilar Cancela, Ana Prieto, Noa Díaz and Marina Ortega.

After the reading of a commemorative manifesto by these representatives, the first to speak was the Knight himself to highlight work for “real equality” by socialists, who do not accept “lessons from either the right or the independence movement” in the defense of women’s rights.

Caballero has influenced the “enormous economic and social crisis” that affects the territory and that already in 2019 40 percent of wage earners were paid below the minimum wage, a gap “that becomes larger” in these circumstances.

For this reason, it has called for “policies of progress” that allow us to overcome these crises and “reverse the gap” in wages and rights suffered by women. In this sense, she has considered that Galicia after the covid-19 should have “a clear component” in favor of feminism and real equality, placing the feminist agenda at the center.

Caballero has stressed the need for Galicia to have a Department of Equality “that is a reference” and has appealed to recover “the history of women and the importance of women in history.”

For its part, the mayor of Lugo, Lara Méndez, has urged to “raise your voice” to demand “real equality”, even more so at this moment in which “a social and economic crisis is coming, which is being overwhelmed mainly by women.” Thus, it has denounced that 78 percent of the positions that were lost at this time “have a woman’s name” and has taken the opportunity to demand that this 8M be made visible to women who hold positions of responsibility and participate in decision-making.

Finally, the president of the Pontevedra Provincial Council, Carmela Silva, has warned of the consequences of the crises with the female population with “real and objective” data“To appeal to the importance of moving” forward “and to demand that the feminist agenda be placed” at the center of political action “.