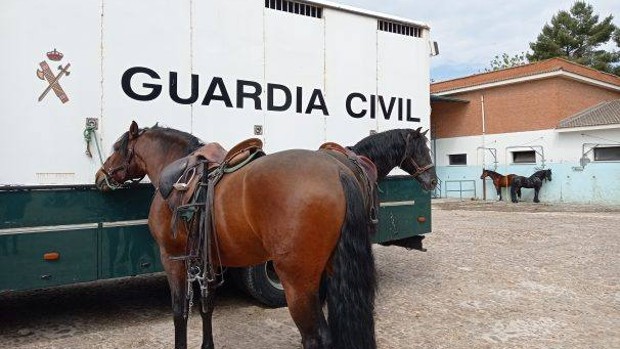 When the pandemic still did not rule our lives, the surroundings of the Santiago Bernabéu stadium were drawn with endless lines of fans and numerous agents mounted on horseback to control security. That image has always been associated with the National Police, but what few people know is that the Community of Madrid hosts the only Cavalry Squadron of the Civil Guard, located in Valdemoro since the 80s. Although it was not always like that. Originally, it was located in the Atocha area, but the expansion of the capital required a new location near the field where it could have larger facilities.

This Unit, made up of 130 riders and 150 horses, is part of one of the nine Reserve and Security Groups (GRS), belonging to the Reserve and Security Group (ARS), reporting directly to the ARS chief colonel. Each of these groups is strategically located in different Spanish cities to be able to move more easily and quickly when their service is required at a specific point in Spain. This would be, explain sources from the Benemérita, the main reason why the Cavalry Squad is located in our region.

In order to move autonomously and quickly to any place in Spain, Mariano Bonilla, acting chief commander of the Squad, explains that have “a fleet of trucks adapted to transport horses, personnel and equipment, as well as different types of vans and all-terrain vehicles, with the capacity to move, if necessary, the entire Squadron simultaneously ”.

“For 10 or 15 years they have requested more frequently the presence of our Unit”, points out Juan Miguel Perucho, captain of the Cavalry Squadron, as he maintains that society is increasingly aware that if you use the horse in the right environment it is very effective: “One rider equals 20 foot guards in channeling work.”

In what cases do they act?

The Cavalry Squad performs services of a very varied type. On the one hand, carry out work to restore public order and control large mass concentrations, such as at festivals or pilgrimages -El Rocío-, in which cases, they act jointly and in coordination with the Infantry Units. On the other hand, they are in charge of the protection and security of high-ranking personalities, as well as citizen security. In the latter case, the prevention of forest fires stands out, which, according to Captain Perucho, “is one of the main tasks in the summer period.” They also participate in the protection and assistance of pilgrims on the Camino de Santiago. Another citizen security task is the surveillance of agricultural and livestock areas at harvest time due to the crimes of theft, both of the product and of the machinery, which take place on the farms. Finally, it is worth mentioning the cross-border services in coordination with the French National Gendarmerie.

Once the Cavalry Squadron was serving the Jaén Command in a device against theft in agricultural and livestock operations, when He was called to help in the search for little Gabriel, since another of its tasks is the search and location of missing persons, according to Commander Bonilla. «The cavalry, given its predominant position in height, makes them pay more attention to the possible details and indications of the disappeared that could remain on the ground; rapid access to steep and difficult-to-access spaces, lands with high and thick vegetation, be it herbaceous, scrub or arboreal and, if we add to this the fatigue of the personnel who participate on foot in the search, makes it a a more than important, necessary means, especially in the first forty-eight or seventy-two hours after the disappearance, ”he explains.

Another of the services of this Unit would be its participation in the main military events, parades and formal receptions, such as the October 12 parade. “Most of the services we provide are operational, instead people think they are formal,” says Captain Perucho, who also points out that every year in these same facilities they organize a national equestrian contest together with the Spanish Equestrian Federation, in the one that is registered around 200 horses. “We have been organizing it for 26 years and it was inaugurated by Infanta Elena, who participates every year,” emphasizes the captain while showing Madrilana some photos in the Sables Room, where they give theoretical classes to horsemen. Since the arrival of the coronavirus, they have not been able to run the contest.

The Cavalry Squad only acts when required. Meanwhile, these civil guards and their equines carry out training in the barracks. “The instruction and training of horses is gradual,” explains Commander Bonilla. Then, in a continuous and progressive way, the horse is socialized with the human being and with its new life environment, in order to move on to basic dressage (generic for any horse). Subsequently, they go on to «a specific police dressage, with the passage of obstacles, jumping and work integrated in unity and, ending, almost in a period of a year, with the instruction of the public order service, accustoming the animal to more stimuli. aggressive such as the detonations of pyrotechnic devices, the permanence in smoke-laden environments, passage of barricades and submission to other stimuli, both auditory and visual, that can be found in any scene during the police service, “he says.

Each Civil Guard has its own horse awarded and this assignment is made in order that the rider and the horse have the highest possible affinity. For this, the requests of the agents themselves and the qualities and temperament of the horse are taken into account.

“The cleaning, feeding, care and preparation of the horse for service is carried out by the Civil Guard personnel assigned to the Squadron”, comments Commander Bonilla. The issue of cleaning the stables is outsourced and is commissioned by a private company that is awarded by public tender.

Regarding the origin of the animals, Most of the equines are Pure Spanish Breed, but they also have Spanish and Hispano-Arab Sports. “The acquisition and incorporation of horses to the Squad is given in three ways: the purchase, the donation and the agreement of the Autonomous Horse Breeding Agency of the Ministry of Defense with the Ministry of the Interior,” says the high command. The first two routes have been used less in the last decade. The objective is to establish as uniform a morphological pattern as possible: «On the date of acquisition, the horses They must be more than three years old and not more than six years old, taller than 163 cm, docile and showy, and pass a veterinary examination ».

“The service life of the horse of the Cavalry Squadron, making an average, has been about fifteen years,” explains the commander. In general, they are usually proposed to be retired in their twenties. Although, they can be discharged for other reasons, such as injuries or some type of illness that does not allow them to perform the service. 10% is renewed annually.

Once the withdrawal has been authorized, The Civil Guard initiates a donation file in coordination with non-profit animal protection associations, “Who are in charge of looking for adopters who guarantee that they will be well cared for and cared for in their well-deserved retirement,” says the commander.

To enter the Cavalry Squad, the aspiring civil guard has to go through a selection process that includes physical, psychotechnical and equestrian tests. “Those who are selected must pass a basic training course lasting five weeks, where the contents are eminently practical, on a general basis of horsemanship. After completing the course, these specialists obtain the corresponding diploma, being able to become part of the Unit, where they finish their training process, ”explains Bonilla.

«The minimum time of permanence in the specialty is four years. The specialist must pass a training plan each year and demonstrate that he maintains the necessary physical and technical aptitude to remain here, ”the commander continues. If the Civil Guard did not pass the tests for two consecutive years, he would be discharged from both the Unit and the specialty.

The Squad has an area of ​​Instruction and Teaching that is in charge of the continuous training of the Unit, “both for the equestrian instruction of the personnel and the taming of the cattle,” says Bonilla. This same staff is in charge of giving the specialization courses to access the position. “To complete the preparation of the Squad’s personnel, the Ministry of Defense issues the following qualifications to the civil guards: teacher, instructor and horseback riding monitor, farriers course and colt-trainer ripper course”, he concludes.

History of the Cavalry Squad

The origins of this institution date back to 1844, with the Duke of Ahumada at the helm. At that time, “the horse is present in the daily service of the Civil Guard as a fundamental means of one of the only two specialties of which the Corps was made up, two fundamental weapons coexisting: Infantry and Cavalry”, says commander Mariano Bonilla . The Cavalry Units were present throughout the national territory, as well as in the overseas provinces (Cuba, Santo Domingo, Puerto Rico and the Philippines).

In spite of this, the high command points out that a Squadron located in Madrid that was created in 1934 within the 14th Tercio remained as a representative of the Cavalry Units. “This was linked in 1958 in the 1st Mobile Command, combining its mission as a Public Order Force with that of an Honors Unit”, he comments.

From then on, the horses that remained deployed throughout Spain were concentrated in the Squadron. This action would be concluded at the end of 1988, date on which he had already been transferred to the Madrid town of Valdemoro. «In 1998, the Cavalry Squad will come under the direct responsibility of the ARS Colonel Chief, now as a group entity, thus maintaining up to the present day of the 21st century this singular conformation, already integrated into a Superior Unit of spirit and structure. Mass Control Unit ”, concludes Bonilla.