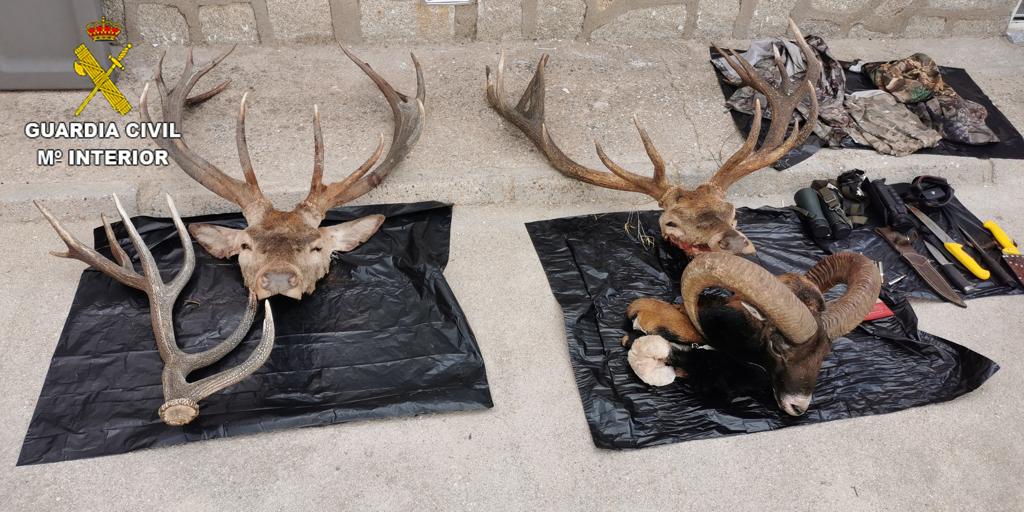 The Nature Protection Service (Seprona) of the Toledo Civil Guard has investigated two men as alleged perpetrators of a crime related to the protection of flora and fauna for killing two deer and one mouflon on a farm located in the municipality of
The Church of Tiétar.

The Elaphus operation began last September when a Civil Guard Citizen Security patrol from the Santa Olalla post identified two occupants of a car inside which they were carrying two deer heads (cervus elaphus) and a mouflon head ( ovis musimon) with signs of having been recently cut.

These two people could not prove their origin, their legal possession or the necessary documentation for their transportation. In addition, both gave contradictory versions of the place where the animals had been killed. Therefore, the Civil Guard patrol intervened for all purposes and communicated it to the section of the
Seprona of Toledo.

During the study of the pieces, the agents observed that the horns were very striking and could have a high value as hunting trophies, approximately 40,000 euros. To determine where they had been killed, they focused the investigation on several farms in Madrid and Toledo with specimens of deer and mouflon animals of a similar category to those intervened.

Finally, the lifeless bodies of two deer and a mouflon were discovered in a selective hunting reserve in the municipality of La Iglesuela del Tiétar, in the province of Toledo. The Seprona took DNA samples from the remains to compare them with the heads and blood of the knives previously intervened, verifying that they coincided in their entirety.

One of the samples of one of the lifeless bodies that appeared on the farm was carried out in an area of ​​a semi-vertical wall that was very difficult to access both for the Civil Guard and for the nursery agents of the farm itself. As a result of this, the fact that both authors knew perfectly the location of the specimens to hunt was also investigated, discovering that one of the investigated had worked and carried out nursery work in previous years on said farm.

The proceedings have already been handed over to the Talavera de la Reina Guard Court and the intervened hunting effects and pieces have been made available to them.