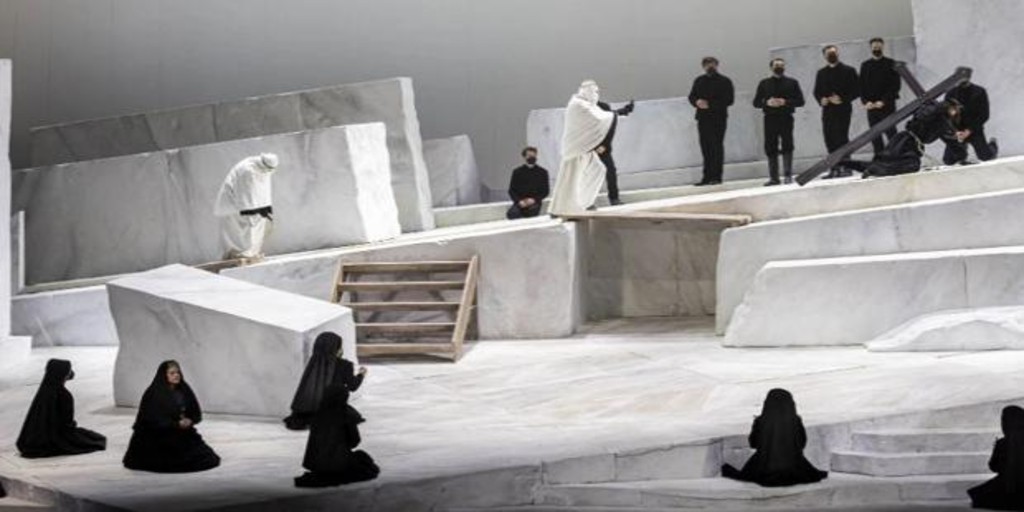 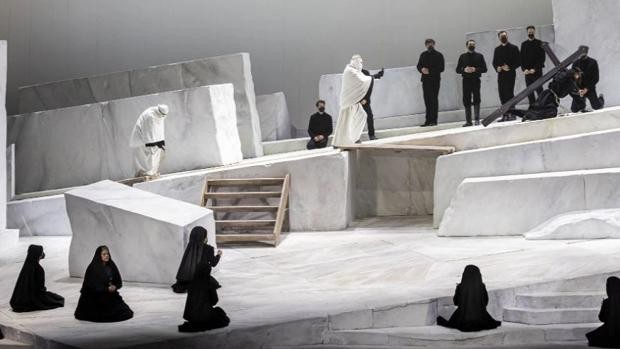 If there is a protagonist above all in these verista performances, it is undoubtedly the Canarian tenor Jorge de León, who performs a feat by singing the demanding roles of Turidu and Canio in each of the performances. Beyond just being successful, the result is outstanding. It gives you the feeling that after that Himalaya, you could go for a Cavaradossi, if necessary. The staging is the already partially known, in these parts, of Giancarlo del Mónaco. Partially, since ‘Pagliacci’ is the first time that it is represented in Valencia, unlike ‘Cavallería’, which had its premiere with that historical musically extreme reading starring Maazel as master, master of the theater, perhaps the slowest that It has never been put on stage, and in the history of phonography, for sure. Seen both, the clown scene convinces me more, more faithful to the script in terms of the place where it takes place with very emotional passages such as when the protagonists are painting their faces at the same time. Honestly, both stage proposals seem to have a different director behind them each. It is not fully understood why Del Mónaco takes the narrative in ‘Pagliacci’ where it really takes place in the libretto, except with a time jump and, however, in ‘Cavalleria’ he transfers the entire town to a quarry of snowy marble, procession included. In general terms, it is a beautiful reading at the beginning, interesting in the contrasts between whites and blacks in mourning of a people permanently haunted by misfortune, but which is tiring and predictable. I am also not convinced by the direction of actors in ‘Cavallería’ and yes in ‘Pagliacci’. In the first there is hardly any physical contact between the protagonists, which does not convince me either aesthetically or as far as the direction of actors is concerned. In fact, in the masterful love / heartbreak duo between Turiddu and Santuzza they practically don’t even touch, which detracts from a lot of drama from the scene. Image of one of the scenes from ‘Caballeria rusticana / Pagliacci’, at the Palau de Les Arts de Valencia – PALAU DE LES ARTS As a counterpoint, see the one starring the former tenor José Cura and the always wonderful Waltraud Meier with Muti in the pit and that is easily found on the internet. Sparks literally fly. Keep in mind that Santuzza does not want to give up Turiddu and that cannot be transmitted from a distance and more in a context of a veristic and excessive nature in terms of passions. The teacher Jordi Bernácer carries out a more than remarkable reading, although perhaps beauty and sonic luxury prevail more than drama, even from the edges. The orchestra phrases marvelously, using Bernácer wisely using the rubato. As for the tempi, it is somewhere between Maazel and an, in my opinion, unattainable Muti, in what is in my opinion the referential version in a 1996 live performance of the Ravenna festival. The musical results of placing the choir in the first box on both sides of the stage, I want to imagine that for health reasons, they were spectacular due to the projection of the voices on the stalls and the stereophonic effect achieved. A choir that, it must be said, was outstanding all evening. As for the voices, as we said, the palm goes to a dedicated Jorge de León, brave, without masks or gambler’s own tricks, giving everything he has on stage. It is inevitable that a voice like this that is so filling and that comes out like a real cannon does not move us, even if it does not have the most refined song in the world or suffers from a certain vibrato, which has improved over time. Without a doubt, De León sings better now than when he performed his previous Turiddu in Les Arts, with a voice that has become more nuanced. If those two or three little buts did not exist, we would be facing the best spinto tenor in the world, but perfection rarely occurs. His Vesti la Giubba in ‘Pagliacci’ was shocking, taking the ovation of the night. Excellent and exciting Ruth Iniesta in the demanding role of Nedda with a mighty voice, very well projected and perfectly handled. In addition, he showed excellent gifts for the theater. It is not easy at all to bring a great Santuzza to fruition and the Italian mezzo Sonia Ganassi makes use of the great job she has to carry out the task with great dignity, since I do not think she has the perfect instrument to embody this role. I think a bigger voice is preferable to pair with Jorge de León. Very good Mamma Lucia by María Luisa Corbacho. Mishia Kiria with a beautiful perfectly handled voice is an excellent Tonio full of sarcasm and evil and an Alfio perhaps too noble in singing that lacked a bit more bad temper. Your great Alfio will arrive in about ten years. Mattia Olivieri has been progressing all these years and sings his Silvio fantastically, although perhaps it should be a bit more restrained on stage. The American Joel Williams was seen to be in a bit of a hurry in his O Colombina, il tenero, although in the rest of his speeches he fulfills much more than dignity. ‘Caballeria rusticana / Pagliacci’ Jorge de León, Ruth Iniesta, Sonia Ganassi, Misha Kiria, María Luisa Corbacho, Mattia Olivieri, Amber Fasquelle Cor de la Generalitat Valenciana Orchestra of the Valencian Community Musical direction – Jordi Bernácer Stage direction – Giancarlo del Monaco