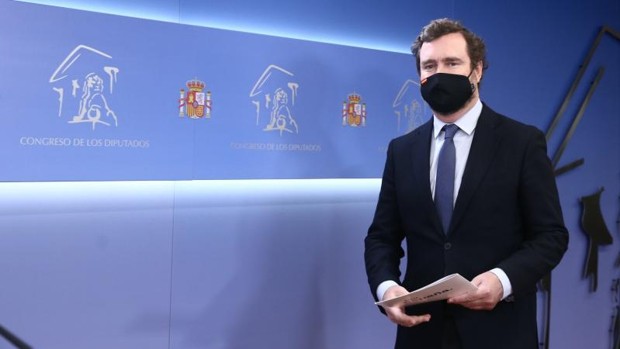 Vox will defend this week in Congress an initiative in which it proposes to include in school curricula information on the crimes of communism, especially those committed by Spanish communists and also by anarchists, as well as ban the “public use” of the hammer and sickle symbol – like the Nazi swastika – and remove the monuments, street names and other signs of tribute to characters that will be signified by their adherence to both regimes.

Those of Santiago Abascal have included these proposals in a non-law proposal in which they echo the resolution against the Nazi and communist totalitarians passed in the European Parliament in 2019.

The text, which will be voted on Thursday in the Constitutional Commission, proposes that Congress urge the Government to comply with that resolution by adopting a series of concrete measures to adapt it to our country.

Thus, it demands that it be included in textbooks and school programs “Sufficient information on the crimes and other human rights violations of the Nazi and communist regimes, including those committed by Spanish communists and anarchists. ‘

The initiative, collected by Europa Press, also requests that the removal of monuments, street names and other signs of tribute to characters who “were signified by their adherence to the Nazi or Communist regimes”, or who “have participated in the crimes committed by one of those totalitarian movements ”.

The prohibition of the “public use” of emblems of these totalitarianisms such as the “swastika” and the “hammer and sickle” is another of Vox’s requests, which also urges to celebrate on May 25 the ‘International Day of the Heroes of the Fight Against Totalitarianism’, both in Congress and in schools and also with public radio and television space.

More than one hundred million deaths

In the exposition of reasons for their non-law proposal, those of Abascal emphasize that both “fascist” and communist totalitarianism “considered liberal democracy periclidated and advocated the absolute subordination of the individual to a” total State “supposedly the bearer of a grandiose collective project: the strengthening of the nation in one case and the construction of socialism in the other ».

But later they only mention the crimes attributed to communism, stressing that this totalitarianism It is not, in his opinion, “an adulteration of the original Marxist doctrine”, but “a consistent development of its premises”.

“The application of communist ideology since 1917 has resulted in more than one hundred million deaths to date – by direct repression or politically induced famine – and the construction of oppressive states based on the denial of political pluralism and destruction of civil, economic and intellectual freedom ”, they argue, before providing figures of victims in China, Cambodia, Vietnam, North Korea, Cuba, Venezuela and Eastern Europe.

They also mention “the 72,500 people executed in the rear of the Republican side during the Spanish Civil War”, a figure that they collect, as they emphasize, from the “estimate of the most rigorous study of casualties” of that conflict, the one carried out by Ramón Salas Larrazábal in ‘Losses of the war’, where it is estimated that among those victims there were “6,800 priests and nuns.”