What you need to know – POLITICO 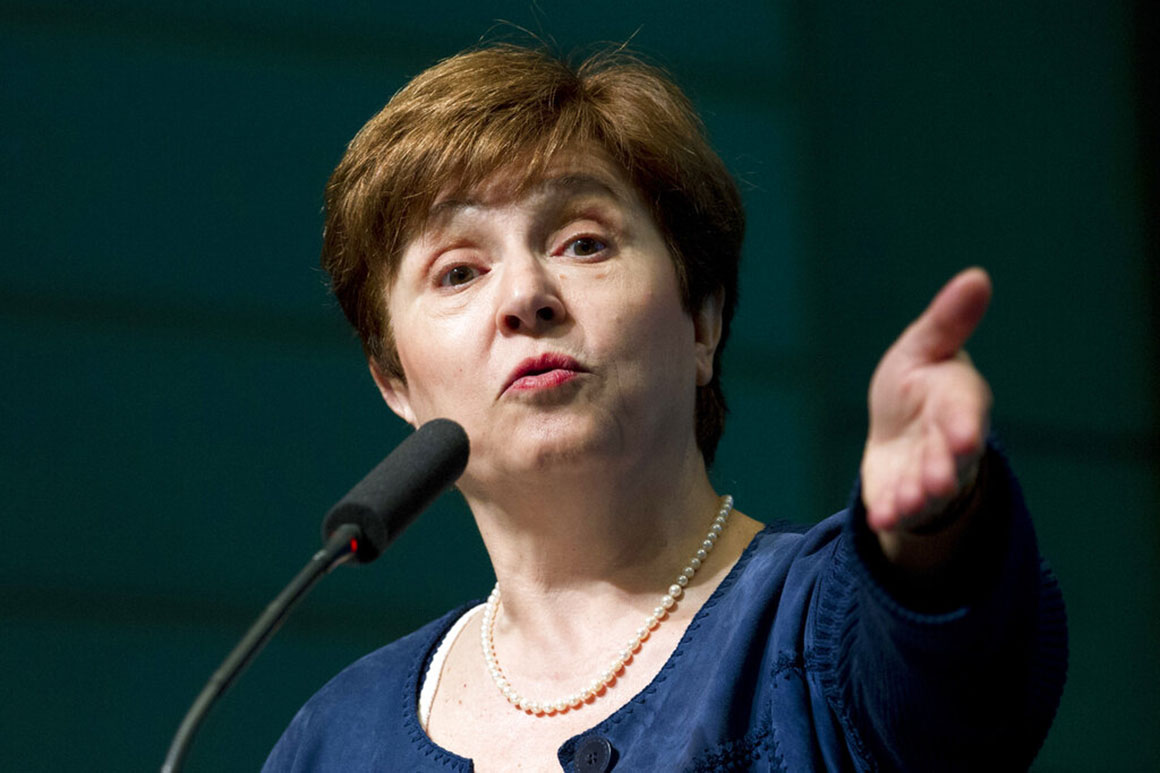 Press play to listen to this article

Kristalina Georgieva will remain International Monetary Fund boss after its board decided against giving her the axe on late Monday.

Speculation over the Bulgarian’s future has been rife for weeks following a probe last month into allegations she tampered with data during her time as chief executive of the World Bank to improve China’s global standing in the business and investment world.

The scandal had threatened to overshadow celebrations at this week’s IMF-World Bank biannual pow-wow in Washington, where top finance ministers and central bankers will rubber-stamp a global tax accord that 136 nations struck last week.

Georgieva’s potential embarrassment has been spared after the IMF executive board’s announcement that it had “full confidence” in her “leadership and ability to continue to effectively carry out her duties.” At the heart of the board’s deliberations was an inquiry, published last month, that accused Georgieva of pressuring World Bank staffers to boost China’s ranking in the annual Doing Business report for 2018.

The report was an annual flagship publication that examined how business-friendly countries are by scrutinizing how their rules and regulations boost — or constrain — corporate activity. The global lender scrapped the report altogether last month in response to the scandal, adding in an accompanying statement that “trust in the research of the World Bank Group is vital.”

Georgieva has repeatedly denied the inquiry’s findings, which according to her lawyer, Lanny Breuer of Covington & Burling, draw inappropriate and unsupportable inferences about her conduct and state of mind.

But some questions over Georgieva’s role in the scandal linger. The shine from the IMF board’s announcement was taken off from its claim that the evidence presented “did not conclusively demonstrate” that she“played an improper role.” Not a full ringing endorsement, especially considering the geopolitics at play.

Here’s what you need to know about the scandal.

Who is Kristalina Georgieva?

Georgieva returned to the World Bank in 2016 after a six-year stint at the European Commission, where she held the prestigious post of budget commissioner. The World Bank was familiar territory to her as she had spent 17 years there, rising to the rank of vice president at the international lender. She’s highly respected in Brussels, where many officials are sympathetic about the situation she finds herself in.

Her exit from the EU capital wasn’t without controversy, however, after a falling out with the Commission’s then-secretary general, Martin Selmayr.

Three years after her return to the World Bank, Georgieva was appointed as managing director for the IMF, replacing Christine Lagarde, who became president of the European Central Bank.

EU capitals, spearheaded by France, fought hard for Georgieva’s appointment to ensure a European remained at the top of the IMF amid concerns that China, Japan and Singapore might push for the job. Traditionally, the IMF is led by a European, while the World Bank president comes from the United States, which supported the EU’s ambitions of holding on to the IMF post. The IMF executive board even removed an age limit of 65 for its managing director so that Georgieva (66 at the time) could get the job.

The World Bank hired an American law firm called WilmerHale to lead an inquiry into allegations its president, Jim Yong Kim, and Georgieva pressured staffers at the institution to boost China’s ranking in its 2018 Doing Business report. The World Bank’s leadership was on a mission at the time to raise capital from stakeholders, including China, which had complained about its 2017 ranking, pegged at 78.

Senior officials from the Chinese government met with World Bank staff and Kim, and had dinner with Georgieva to advocate for an improved ranking for 2018, when China’s rating was set to drop to 85. Georgieva and Kim’s staff members then intervened, according to WilmerHale, to keep China’s rating at 78 to ensure their capital-raising efforts wouldn’t be jeopardized.

“Employees felt that they could not challenge an order for the Bank’s president or CEO without risking their jobs,” the inquiry said. WilmerHale’s findings also outlined irregularities in how Saudi Arabia’s ranking was calculated in the Doing Business edition of 2020.

Georgieva, however, has gone on record to “fundamentally” disagree with the U.S. law firm’s findings. She also dismissed the report’s findings in a statement when questioned by the IMF board. Unrelated to the inquiry, Kim resigned from his position in early 2019

EU capitals backed Georgieva despite the damning inquiry. Two officials told POLITICO that EU diplomats met over the weekend to ensure such support could carry through to the executive board, where countries hold a share of votes depending on their stake in the fund. But Europe’s votes wouldn’t have been enough to keep Georgieva in her job without U.S. help.

That put all eyes on U.S. President Joe Biden, whose administration is taking a firm approach to Beijing amid growing tensions over the Chinese military build-up in the South China Sea and uncertain trade relations. Senior U.S. senators had written to Biden, calling on him and the Treasury to carry out due diligence over the World Bank scandal and “ensure full accountability.”

“While Ms. Georgieva has stated that she ‘fundamentally disagrees with the findings and interpretations,’ she has not provided any evidence to dispute them,” Democrat Bob Menendez and Republican James Risch wrote in their missive. “It is imperative that there is immediate and full transparency and cooperation from the World Bank, the IMF, and most importantly, Ms. Georgieva.”

This story has been updated.

This article is part of POLITICO’s premium policy service: Pro Financial Services. From the eurozone, banking union, CMU, and more, our specialized journalists keep you on top of the topics driving the Financial Services policy agenda. Email [email protected] for a complimentary trial.